If one thinks of the hammer blow of an old-time, brawny-shouldered blacksmith on a glowing piece of iron, one gets a mental image of explosive forming, rather than of a fine machinist using a precise machine to turn screw threads on a part of a gun. To be even more precise, explosively formed projectiles (EFP) are weapons of war that, before hitting their target, use high explosives to alter their shape or other characteristics (e.g., solid vs. liquid vs. gas).

There have been three basic generations of EFP, two relatively old and manual, and one recent and requiring precise electronic control. It is useful to know the distinction, as when accusations appear, in the press, that country A is using EFPs against country B, is this something that would require national-level manufacturing, or is something the author, correctly handling the explosives, could build in a home shop?

Franz von Baader, in 1792 or 1799, discovered the process of explosive engraving, but this could not have been explosive forming in the modern sense, because he worked with black gunpowder, the detonation velocity of which is too low for what is generally called the Munroe effect. Engraving with high explosives was done by von Foerster in 1883. Generalized shaped charges, however, were developed independently, in 1888, by Charles E. Munroe of the U.S. Naval Torpedo Station. They were used only in mining, however, until World War II.[1]

In WWII, the effect was used in a variety of antitank and antishipping weapons. The device consists of a cylinder of explosive, which, in the direction the effect is desired, has a conical hollow. If the hollow is lined with metal, the warhead is called "shaped charge", otherwise "hollow charge", although the terms are often interchanged.

Because the explosive force around the cone converges at a specific distance, the standoff between the front of the hollow cone, and the surface of the target, is critical. With typical antitank rockets such as the WWII "Bazooka", this distance is in inches.[2] The technique of flash radiography appeared to have been essential to tuning the implementation.

Perhaps the greatest military disadvantage of Munroe-effect weapons is that they must detonate at a precise distance from the hard surface at which they are targeted (i.e. the distance set by the standoff, and with the axis of the explosive perpendicular to the service. Countermeasure to the first requirement include putting light metal, such as chain-link fence or thin metal slats, (6-12 inches/152-310 mm) in front of the target. This lightweight material will often, but not always cause the explosive to predetonate and the armor-piercing jet not to form.

Another, more reliable in countering the weapon but with a different set of drawbacks is reactive armor. Perhaps counterintuitive but workable, reactive armor consists of sheets of explosive, lightly jacketed in metal, on the surface of the heavy armor to be protected. When it is contact by a fast-moving object, either the standoff of a Munroe-effect warhead, or a nonexplosive "long rod penetrator" as used in many tank main gun warheads, the reactive armor will detonate, and variously disperse the forming Munroe jet, or deflect or break the penetrator.

This will spray fragments and limited blast around the site struck, which is dangerous for any troops walking near the tank. Also, heavy antitank weapons have developed a countermeasure to reactive armor with "tandem warheads". The initial warhead, typically lighter, detonates reactive armor if such is present. The second warhead then penetrates the no-longer-protected armor.

Reactive armor, of course, has to be replaced immediately after use, or it is no longer protective. Reactive armor works by an application of the Misznay-Schardin effect, described below.

If the antitank weapon can be predetonated before it actually strikes the protected vehicle, the "protect once" limitation of reactive armor disappears. Techniques include defensive grenade launchers[3] and lasers. 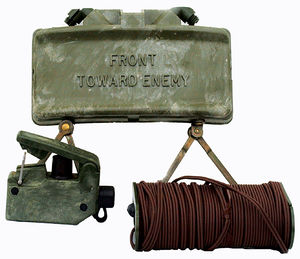 As opposed to the cylinder/cone of the Munroe effect, which produces a narrow jet, the critical aspects of this weapon are a relatively large sheet of explosive, with a sturdy metal backing plate. The basic principle is that the main force of the explosion is directed away from the backing plate. The explosive wave, in general, is broader than a Munroe effect, producing a more-or-less flat wave rather than a jet.

If objects of considerable mass, but still less dense that the backing plate, are in front of the "open" side of the explosive, they will be propelled forward by the expanding shock wave. This is the principle in the U.S. M18A1 Claymore mine, which is a book-sized device, with a mildly concave backing plate, a sheet of explosive over it, and metal fragments on the surface of the explosive. Detonating the charge sends a fan-shaped blast and fragmentation pattern in the direction of the target.

Since the wave is straight or diverging, there is no critical standoff requirement as with the converging Munroe effect.

There are reports that devices in Iraq use a sheet to propel a hard metal penetrator into the thinner side plates of tanks and other armored vehicle.

"Selectively targeted Skeet (STS) is a precision-guided munition, four of which are inside a BLU-108A/B submunition. Several BLU-108A/B devices, in turn, can be ejected from a bomb, missile, etc., so the Skeet proper could be called a sub-sub-munition, but this is not common usage. It is preferred that the carrier itself be guided, such as the Joint Standoff Wepaon (JSOW).[4]

As the BLU-108 approaches the target area, it releases a parachute and fires a small rocket to spin the container. Four Skeets are released at right angles to one another.[4] They deploy "Samara Wings" which are weighted fabric blade tightly packed into the submunition is released. The STS is deployed spinning from its host carrier; causing both a stabilizing spin and tilting the Skeet appropriately. the Samara Wing then unfolds, providing an aerodynamic auto-rotation and proper tilt of the submunition.

In its descent, the Skeet uses pairs of infrared sensors, at two different wavelengths, to search for valid targets. If no valid target is found, it will self-destruct at an altitude intended to minimize hazard to people on the ground. If a valid armored target is (e.g., tank (military|tank) is fired, the Skeet orients itself to the top center of the target. At the appropriate moment, it fires explosives into itself, so the thinnest armor of a tank, on its top, is impacted by a just-formed molten copper projectile of moving metal, traveling at hypersonic speed, which will penetrate the armor by forward momentum and heat. Alternatively, if the Skeet senses a "soft" target such as a truck, it will damage that larger unarmored target with 16 fragments shot radially from its center. A timer will cause to self-destruct if it lands with no target.[5] At least in the Navy version, the current explosive filler, Octol, will be replaced with an "insensitive high explosive", which cannot detonate under normal handling or even rifle fie.[4]

It should be reasonably obvious that the sensors, control computer, and even the mechanical construction requires substantial industry. There are no clearly demonstrated examples of EFPs in this class, which adapt to the target, outside the militaries of major industrial countries.