Flash radiography is a technique to photograph objects moving at extremely high speed, such as in explosions, to allow the measurement of "their position, speed, shape, and internal density profiles...radiographic images are used to validate computer models and to experimentally determine material parameters in transient interactions, including high temperature and pressure regimes." While it has dual-use civilian applications, it is a technology critical to the development of nuclear weapons and advanced conventional explosives.

The technique appears to have been invented independently by British and American workers in 1943,[1] and by German researchers whose work was discovered after WWII,[2] and by Soviet engineers in the same time period. All were initially working on shaped charges. British development was under J.L. Tuck at the Armaments Research Department; U.S. work at Aberdeen Proving Ground by L.B. Seely and J.C. Clark; the German development by H. Schardin and E. Schumann;[3] and the Soviet work by L. Altshuler and V. Zukerman.[4]

Any flash radiography system used to image explosions has the main components: 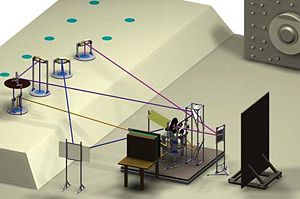 There are several ways to produce the X-rays:

A computer-aided design layout shows placement of the experiment, which is surrounded by mirrors on stands, flashlamps, and a radiographic film cassette. Extremely energetic x rays emerge from the Flash X Ray machine through a port (upper right). Behind the experiment is the protective enclosure for radiographic film. Images from a series of mirrors are reflected to four optical cameras, providing different viewpoints. Each optical path is indicated by a different color. The cameras are located directly below the four ports on the left.[6]

In the late 1990s, the flash source at Lawrence Livermore National Laboratory was a induction linear accelerator. A gamma ray camera, rather than traditional X-ray film, captures the image.

An injector introduces an electron beam into the FXR accelerator. After passing through the accelerator, the beam enters a drift section that directs it toward a 1-millimeter-thick strip of tantalum, called a target. As the high-energy electrons pass through the target, the electric field created by the stationary charged particles of the heavy tantalum nuclei causes the electrons to decelerate and radiate some of their energy in the form of x rays. The product of this slowing process is called bremsstrahlung (braking) radiation. The x-ray photons travel toward the exploding device, where most are absorbed. The photons that make it to the camera are the image data.[7]

One state-of-the-art facility is the Dual-Axis Radiographic Hydrodynamic Test (DARHT) at Los Alamos National Laboratory, which, by imaging simultaneously with beams at right angles, gives a much better three-dimensional sense of the target. Its first full test was on 9 December 2009.[8] It uses two linear accelerators:

The beam at the exit of the accelerator is required to be 2 kA of electrons at 20 MeV and with a 2 μs long flat current pulse. Downstream kicker systems being designed and built by Lawrence Livermore National Laboratory (LLNL) will select 4 short pulses out of the 2 μs macropulse for delivery to the X-ray conversion target."[9]

For appropriate applications, the newer pRad technology offers advantages over X-ray. First, it can image more quickly than a comparable X-ray facility, 20 versus 4 in a single hydrotest. This allows approximation of full motion.

"For most elements in the periodic table, a proton's attenuation length increases with its energy. Fortunately, modern accelerators can produce protons with the high energies required to match their attenuation lengths to the thickness of a hydrotest mock-up. The attenuation lengths for x-rays, however, peak at about 4 million electronvolts, the reason that DARHT produces x-rays with this energy. But even at its peak, the x-ray attenuation length is only a tenth or less that of high-energy protons, the main reason that proton radiographs of thick, dense hydrotest objects reveal much smaller changes in density than is possible with x-rays.

"The longer attenuation lengths of high-energy protons also allow a much larger fraction of the protons to pass through the test object than is possible with x-rays, while still producing radiographs that detect small changes in density. Thus, the total amount of radiation, or dose, required to produce a proton radiograph is much less than that required for an x-ray radiograph.[10]