Ballistic missile defense, in the post-Cold War era, is increasingly an issue for Europe. The primary concern is no longer the Soviet Union, but Iran and possibly other Middle Eastern actors. While Russia theoretically is a threat, it is not a likely one.

Russia, however, became indignant over what it saw as U.S. action in its sphere of influence, when the George W. Bush Administration proposed placing Ground-Based Midcourse Interceptors in Poland. While much mass media coverage portrayed this as a shield against attacks against Eastern Europe, the particular technology proposed actually was optimized for protecting the East coast of the United States against intercontinental ballistic missiles.

On 17 September 2009, the Obama administration withdrew the earlier proposal, in part because it could not be implemented for several years, and really did not address the short-term Iranian threat of intermediate-range ballistic missiles. An alternative approach can be deployed in a year, at lower cost. It has been proposed that the system be implemented as a European multilateral defense, rather than bilateral agreements with the U.S.

The Shahab 3B may not yet be operational; the Taepo Dong 2 has performed badly in tests. 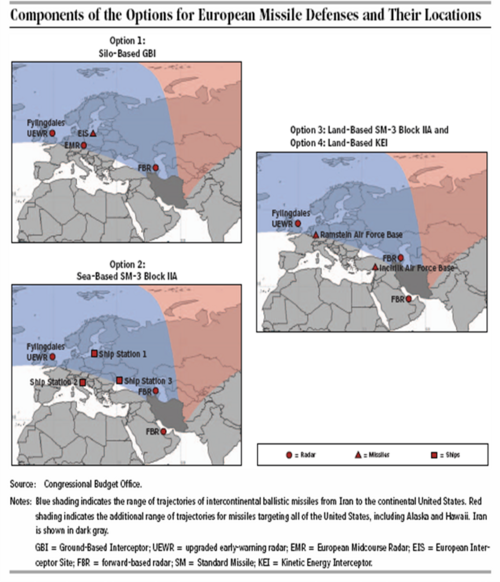 In this illustration from the Congressional Budget Office (CBO)[1] the systems shown are principally European-based components for engaging ICBMs aimed at the United States. The initial Bush administration proposal was silo-based GBI, option 1, which is midcourse-intercept-only and could not provide terminal defense of a target in Europe, except possibly in a very limited engagement geometry This proposal also assumed ten interceptor missiles, with two fired at each incoming ICBM, so six Iranian missiles could saturate the system even under fairly optimal assumptions.

It assumed the forward-based radar would be in Azerbaijan, one X-band radar in the Czech Republic and one at a location to be determined. It would be available in 2013.

Option 2 assumed the Block II SM-3, 10 per ship, a missile that would be available in 2018. Current warships that fire SM-3 have between 96 and 120 launch tubes the ship some SM-2 and ESSM anti-aircraft missiles for self-defense; the SM-2 also has terminal defense capability.

Ships would be stationed in waters off the coasts of Romania, Eastern Italy, and Poland. There would be transportable forward X-based radars in Azerbaijan and Qatar.

Option 3 assumes the SM-3 missiles are on land, which is not a major technological effort, but also includes a not-yet-operational KEI. There would be transportable forward X-based radars in Azerbaijan and Qatar.

This would place transportable SM-4 launchers at Ramstein Air Base in Germany and Incirlik Air Base in Turkey,

The new proposal has four phases: [2]

Prime Minister of Russia Vladimir Putin, who had attacked the original Option 1 proposal as threatening to Russia's security, called Mr. Obama's decision “correct and brave.” Russia had threatened to station short-range missiles, which could overwhelm the system, in Western Russia, and indicated this was no longer planned. What is unclear and politically controversial is whether Russia will regard this as an incentive to help slow Iranian nuclear weapons development. [3]