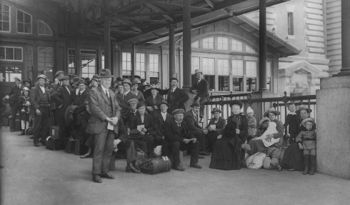 Ellis Island, in New York City Harbor, was the entry point for 12 million European immigrants to the U.S. between 1892 and 1925. The term is a symbol for the free entry of permanent immigrants coming to the U.S. in pursuit of upward mobility, freedom, and the "American Dream." 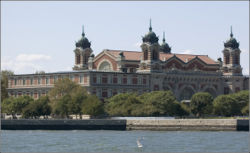 The federal immigration station opened on January 1, 1892 and was closed in November 12, 1954. The Ellis Island Immigrant Station was designed by architects Edward Lippincott Tilton and William Boring. They received a gold medal at the 1900 Paris Exposition for the building's design. Immigrants from Europe were processed by the U.S. Bureau of Immigration (Immigration and Naturalization Service). In the 35 years before Ellis Island opened, over eight million immigrants had been processed locally by New York state officials at Castle Garden Immigration Depot in Manhattan. During the period 1910 to 1940, Angel Island, California, (in San Francisco Bay) was opened on the West Coast; there some 175,000 foreigners were inspected, mostly Chinese. Other small immigration stations were located at New Orleans, Seattle, Boston, Philadelphia and Baltimore.

First they had to pass a six second physical examination. Those with visible health problems or diseases were sent home or held in the island's hospital facilities for long periods of time. Next they were asked 29 questions including name, occupation, and the amount of money they carried with them. Generally those immigrants who were approved spent from three to five hours at Ellis Island. However more than three thousand would-be immigrants died on Ellis Island while being held in the hospital facilities. Some applicants were rejected outright because they were considered "likely to become a public charge." About 2 percent were denied admission to the U.S. and sent back to their countries of origin for reasons such as chronic contagious disease, criminal background, or insanity.[1] 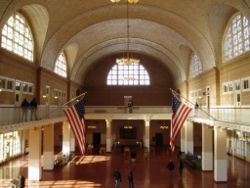 The Registration Hall at Ellis Island

Writer Louis Adamic arrived from Slovenia in 1913. Adamic described the night he spent on Ellis Island. He and many other immigrants slept on bunk beds in a huge hall. Lacking a warm blanket, the young man "shivered, sleepless, all night, listening to snores" and dreams "in perhaps a dozen different languages".

Mandatory medical care was given to immigrants detained at Ellis Island; it was the world's largest medical screening facility. Most arrivals had mainly traveled in steerage, and some had visible mental and physical disorders and abnormalities. By federal law, admission was denied to persons with a "loathsome or dangerous contagious" disease or mental deficiency. The steamship company was obliged to take them back. Most people had a very cursory inspection for gross abnormalities or symptoms, especially of eye disease. While Ellis Island offered state-of-the-art medical treatment for detainees, important human rights issues were nevertheless involved since, for linguistic reasons, some immigrants could not grant consent or request alternative modes of therapeutic help. The medical procedures adopted by the Public Health Service at Ellis Island were consistent with best practices in medicine in America at the time.[2]

As with all historic areas administered by the National Park Service, Ellis Island, along with the Statue of Liberty, was listed on the National Register of Historic Places on October 15, 1966. Today Ellis Island houses a museum reachable by ferry from Liberty State Park in Jersey City, New Jersey and from the southern tip of Manhattan in New York City. The Statue of Liberty, sometimes thought to be on Ellis Island because of its symbolism as a welcome to immigrants, is actually on nearby Liberty Island, which is about 1/2 mile to the South.

More than 12 million immigrants passed through Ellis Island between 1892 and 1954 before dispersing to points all over the country.

Smith (2002) reviews the establishment, history, and contents of the exhibition of the Ellis Island Immigration Museum. The museum documents the arrival and immigration process. The exhibits employ oral histories, photographs, and personal artifacts brought by the immigrants. Smith highlights the impact of the "new social history" of the 1970s and 1980s on the exhibits, but laments the lack of interpretive presentations concerning immigration policy, racial attitudes, differences in economic status of immigrants, and their lives after their release from Ellis Island either into the United States or back to their country of origin.

Beliefs about Ellis Island abound, some unsubstantiated. Among the most asserted among them are that government officials compelled immigrants to take new names against their wishes. However no historical records bear this out. Actually, federal immigration inspectors were under strict bureaucratic supervision and were more interested in preventing inadmissible aliens from entering the country (which they were held accountable for) rather than assisting them in trivial personal matters such as altering their names. In addition, the inspectors used the passenger lists given them by the steamship companies to process each foreigner. These were the sole immigration records for entering the country and were prepared not by the U.S. Bureau of Immigration but by the steamship companies.[3]

Other false claims suggest Albert Einstein and Fiorello LaGuardia passed through the station as immigrants, and that the anti-Italian expression "wop" was a shortened form meaning "without papers."

Ellis Island takes its name from Samuel Ellis, a colonial New Yorker, possibly from Wales, who owned the island during the late 1700s and kept a tavern, serving sailors and local fishermen. Samuel Ellis was a local farmer and merchant.

The original Ellis Island is within the boundaries of Jersey City, New Jersey but is legally part of New York under the 1834 treaty setting the boundary between the two states. However, due to landfill which has expanded the island's 1834 boundaries, the island is now divided between New York and New Jersey. It is wholly in the possession of the Federal government as a part of Statue of Liberty National Monument, however, and is under the jurisdiction of the U.S. National Park Service. The island now which was largely artificially created through the landfill process, has an official land area of 129,619 square meters, or 32 acres, more than 83 percent of which lies in the city of Jersey City. The original portion of the island is 21,458 square meters (5.3 acres), and is completely surrounded by the artificially created portion.

On October 15, 1965, Ellis Island was proclaimed a part of Statue of Liberty National Monument, which is managed by the National Park Service. The island is on the New Jersey side of the Hudson River. During the colonial period, however, New York had taken possession, and New Jersey had acquiesced in that action. In a compact between the two states, approved by U.S. Congress in 1834, New Jersey therefore agreed that New York would continue to have exclusive jurisdiction over the island. Thereafter, however, the federal government expanded the island by landfill, so that it could accommodate the immigration station that opened in 1890 (and closed in November 1954). Landfilling continued until 1934. Nine-tenths of the current area is artificial island that did not exist at the time of the interstate compact.

New Jersey contended that the new extensions were part of New Jersey, since they were not part of the previous cession. New Jersey eventually filed suit to establish its jurisdiction, leading New York City Mayor Rudolph Giuliani dramatically to remark that his father, an Italian who immigrated through Ellis Island, never intended to go to New Jersey. The dispute eventually reached the U.S. Supreme Court, which ruled in 1998 that New Jersey had jurisdiction over all portions of the island created after the original compact was approved. This caused several immediate problems: some buildings, for instance, fell into the territory of both states. New Jersey and New York soon agreed to share claims to the island. It remains wholly a Federal property, however, and none of this legal maneuvering has resulted in either state taking any fiscal or physical responsibility for the maintenance, preservation, or improvement of any of the historic properties that make the island so significant in the first place.[4]