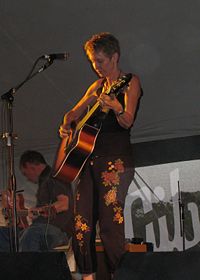 Eliza Gilkyson at the Stingaree

Eliza Gilkyson, daughter of songwriter Terry Gilkyson, is a third generation musician and folk/Americana/folk-rock singer-songwriter. Her upcoming album, Beautiful World, due for release in May 27, 2008, has received glowing reviews. The New York Times calls her music "lush and passionate… edgy lyrics with piercing imagery", and the Austin Chronical defines the album as "cathartic to the point of jubilation, brimming with radio-polished tunes". Reviews of her previous album, Your Town Tonight were equally flattering. The Boston Globe describes the album as “Masterfully structured, startlingly intimate songs in a beautifully lived in voice”. Vintage Guitar states: “Your Town Tonight delivers a satisfying helping of first class folk music that can be enjoyed equally by longtime fans or first-time listeners”, while Folkwax states that Your Town Tonight simply could not be bettered." She has appeared on All Things Considered (NPR) and Austin City Limits, was inducted into the Austin Music Hall of Fame, and has toured with Patty Griffin and Mary Chapin Carpenter. She continues to tour the United States and played at thr Stingaree Music Festival in 2008.