The earliest digital switch was the electromechanical relay, consisting of a solenoid with mechanical contact points. Relays provide a physical switch that closes when electricity animates a magnet. Early relays were slow and prone to failure due to dust in the contacts or bending of moving metal parts. Modern relays are more resilient because they are encased in housings that prevent dirt or dust from clogging the contacts, or accidental bending of armatures. However, relays are still prone to failure over time due to mechanical stress. Compared to transistors (below), they are slower, larger, and consume more power.

The vacuum tube, also called a triode, was invented in 1906 by American inventor Lee de Forest. The triode resulted from the introduction of a third electrode (called a grid) into the diode (an earlier form of vacuum tube similar to an incandescent light bulb). The triode could be used both as an amplifier (for radios) and a switch (for computers). Many of the early radio transmitters were built by de Forest using triodes, which revolutionized the field of broadcasting at the time. Radio transmission used vacuum tubes as analog devices, to modify (but not stop and start) an electrical current. Invention of the triode built upon several previous developments in physics or engineering, including the diode and the Edison effect.

The ability of triode vacuum tubes to act as switches (on/off devices that stop or start an electrical current) would later be important in the building of the first electronic computers. When used as an "on/off" switch in a computer, vacuum tubes were also sometimes called electron valves, or just valves[1]. Unlike relays, vacuum tubes expose no physical armature contacts to break or get dirty, and they are faster than relays. But they also cost a lot to manufacture, consume a lot of power, give off a great deal of heat, and tend to burn out often.

Tubes filled with gas rather than evacuated to vacuum are used for specialized applications, typically involving high power, such as the krytron. 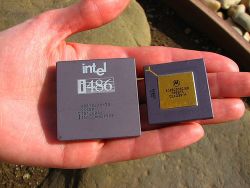 In the 1950's the Bipolar junction transistor (or BJT) was invented at AT&T Bell Laboratories in 1948 by John Bardeen, Walter Brattain, and William Shockley (all of whom shared the Nobel prize for physics in 1956 for the transistor's invention). This type of transistor still is widely used today. Today's most-used transistor is the Metal Oxide Semiconductor Field Effect Transistor (MOSFET), present by the millions in integrated circuits. This transistor was invented by Dawon Khang and Martin Atalla in 1960, another Bell Labs research team.

Transistors perform operations earlier provided by vacuum tubes, but are smaller, cheaper, require less power, and obtain faster switching times. The first transistor was made from materials that included a paper clip and a razor blade.

Slapper detonators have been used as part of one-shot electronic switches.[2]