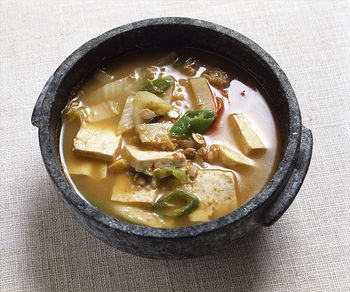 Doenjang jjigae (된장찌개),[1] also known as Dwenjang Chigae or Dwenjang-guk, is a traditional Korean stew that is made with, among other ingredients, fermented soybean paste called doenjang that is characteristic of its hearty taste. The paste is added to a broth of dried anchovy to make the soup base, which may be seasoned with salt, ginger, chili powder, garlic, soy sauce, and sesame oil. The other ingredients for the dish may include kimchi, tofu, potato, green onion, and mushroom, as well as shrimp, clam, or beef. Meat is usually the highlight part of the food — the stew being mostly vegetable in content.