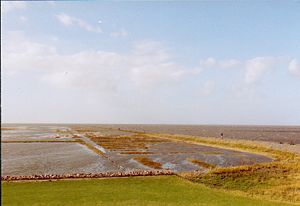 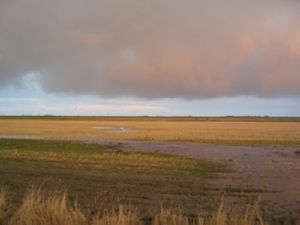 Dithmarschen is a district in the state of Schleswig-Holstein in Germany. It is situated between the North Sea and the rivers Eider and Elbe and the North-East-Canal. From the early Middle Ages until 1559, Dithmarschen was a free peasants’ republic. Dithmarschen consists of marshes and coastal heathland. Important towns are Heide, Meldorf, Brunsbüttel, Marne, Wesselburen and the touristic place Büsum. With the administration reform of 1970, Northern and Southern Dithmarschen have come together to form one unit, the district of Dithmarschen with its capital Heide. The oldest archeological finds in Dithmarschen are from the early paleolithic age. There was settlement in the marshes. In 804, Charlemagne conquered Dithmarschen and the neighbouring districts. For the next thousand years, Dithmarschen belonged to the county of Saxonia. After the battle of Bornhöved in 1227, the district belonged to the archdiocese of Bremen. In 1500, the people of Dithmarschen defeated the Danish army under King John in the battle of Hemmingstedt. In 1559, the united troops of Demark and Schleswig-Holstein beat the Dithmarschen forces.

The district was divided into three parts. When duke John of Schleswig-Holstein-Hadersleben died in 1581, his share was divided, so that soon the district had only two parts: Northern and Southern Dithmarschen.