For the modern states, see Czech Republic and Slovakia 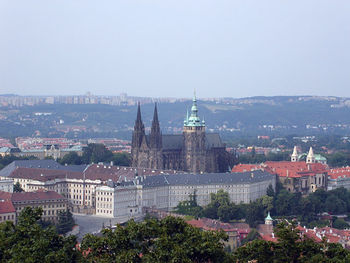 (CC) Photo: Louise Valmoria
Prague was the capital of Czechoslovakia.

Czechoslovakia was a state in Central Europe that existed from October 1918, when it declared independence from the Austro-Hungarian Empire, until January 1993, when it was dissolved and succeeded by the Czech Republic and Slovakia. Its capital was Prague and in 1992 its population was approximately 15.6 million people.

Czechoslovakia lost territory to Nazi Germany in the form of the mainly German-speaking "Sudetenland" via the Munich Agreement of 1938, and to Hungary that same year due to the Arbitration of Vienna. In March 1939 the Nazis engineered a Slovak revolt and declared Czechoslovakia dissolved; they then occupied what is now the Czech Republic, declaring it a "protectorate". Slovakia remained as a German client state until 1945, but in 1943 the Allies derecognized the March 1939 events, instead recognizing Czechoslovakia's government-in-exile, which had continued to function. After the war, the vast majority of ethnic Germans were expelled under the Beneš decrees.

In February 1948, the Communist Party of Czechoslovakia took power in a coup. In 1968, as the country's economy liberalised, the Soviet Union invaded, which brought a halt to reforms. Communist government ended in 1989 with the bloodless Velvet Revolution, following significant protests against the status quo. In 1993, the country was split into two new states, reflecting the differences that had previously existed between the Czech and Slovak peoples. This was done without a referendum, the authorities accepting a Slovak nationalist majority in Slovakia in the recent election as sufficient proof of the wishes of the Slovak people.