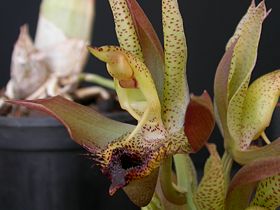 (CC) Photo: Dalton Holland Baptista
Catasetum schmidtianum flower. The columns of male Catasetum flowers do not have the female organs. They show a pair of thin structures called antennas which trigger a shot of the pollinarium as far as five feet, which is intended to place the pollinarium on the right place on pollinators' bodies.

In botany, a column, or gynostemium, is a structure found in the flowers of some plant families such as Aristolochiaceae, Orchidaceae, and Stylidiaceae. This structure is the result of the fusion of all sexual parts of the flower into a single organ. In most orchid flowers the column is an elongated central structure which has been an important object of study by taxonomists over the years and is largely used to separate and classify its genera and species. 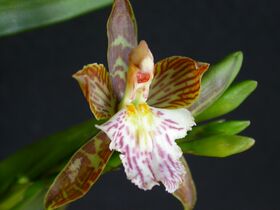 (CC) Photo: Dalton Holland Baptista
The flowers of Aspasia variegata have a very long column, without any lateral appendix. The photo shows the ventral side, with the anther cap at the top and a large hollow stigma in the middle.

The position, shape, proportion and structures present on the column are greatly variable but usually occupy the centre, with all the other segments of the flower placed in a way to favor pollination and to allow only the right agents or pollinators access to the pollen and stigma. Orchids evolved to maximize the chances of pollination because, unlike most flowers, their pollen is aggregated on a pair number, from two to eight, of pellet structures called pollinia. Once the right pollinator comes, it takes all pollen away from the flower at once, so if this mass of pollen does not reaches its destination on the first try, there is no second chance for the flower and all effort is wasted. On the other hand, most orchid flowers are hermaphrodites so they can still be pollinated by an agent carrying the pollinia from another flower. An attracting structure known as the labellum may be present to facilitate pollination. Labella can use any of several mechanisms to maximise the likelihood of pollination. It may offer concrete rewards, such as nectar, but usually not. Labella may have bright colors, they may mimic insects, suggesting the possibility of copulation, or they may form traps, preventing the insects from leaving the flower before they have gone through the stigma. 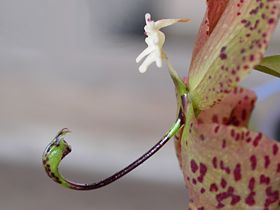 (CC) Photo: Dalton Holland Baptista
The lateral view of the column of Cycnoches schmidtianum explains why this genus has this name: their elongated curved column resembles the neck of a swan.

At the base the column may be short or prolongated in a short or long structure called foot where the labellum is held. Is some orchids the labellum is attached laterally to the column making a sort of tunnel, in others is very loosely hinged and moves with the wind. When the sepals are adnate to the column foot they may form a chin called mentum. Sometimes the leaf also participates of this structure and they form a long tubular called calcar or nectarium.

Some columns have lateral structures called wings or arms which serve several different purposes depending on the species; the most important are: to keep the pollinators on the right track, to hold the labellum in a particular position after the pollinators touch it, making access to reproductive organs easier.

The original position of the column in primitive orchids was with the stigma facing up, but today most orchids twist their ovaries 180º so the flower is up side down and their labellum works as a landing point. This twisting is called ressupination. Sometimes orchids ressupinate 360º; sometimes they do not ressupinate at all.

After the orchid flowers started ressupinating the column evolved in a way the we now refer to ventral area to what is in fact used to be primitively its dorsal area. Therefore, the stigma is generally located ventrally, opened towards the lip. The stigma, or female organ, has the form of a small bowl and may be hollow or deep, unilocular or divided in more sections.

It communicates internally or ventrally with the apex of the column, where usually the pollinia are located. Sometimes there is a small extension or little beak to the median stigma lobe, called rostellum which are held in place by a sort of viscous substance called viscidium. Some orchids have yet another structure between the pollinia and viscidium called stipe.

The pollinia are covered by a structure, generally of helmet format, called anther cap. This may be located at the exact apex of the column, over, or under it. The area of the column that embeds the anther cap is called clinandrium. The clinandrium may be smooth or serrilated, hooded of flat. The anther cap is shaped in a way it is released just when the pollinator is leaving the flower, not on arrival, so this avoids flowers from being pollinated by their own pollen.

In almost all orchids each one of these structures evolved to match a particular insect or bird and totally depend upon them to their pollination. Very few species are cleistogamic, meaning they can self pollinate, actually there are species that even have separate male and female flowers to avoid this.