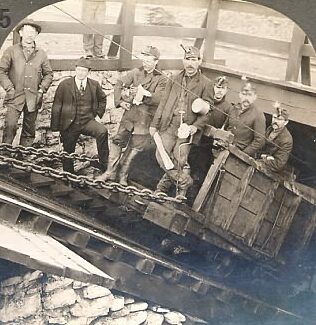 The Coal Strike of 1902 was a strike by the United Mine Workers of America in the anthracite coal fields of eastern Pennsylvania. It played a role in the history of mining, marking the first federal intervention in the business. The strike threatened to shut down the winter fuel supply to all major cities (homes and apartments were heated with anthracite or "hard" coal because it had higher heat value and less smoke than "soft" or bituminous coal.). President Theodore Roosevelt became involved and set up a fact-finding commission that suspended the strike. The strike never resumed, as the miners received more pay for fewer hours; the owners got a higher price for coal, and did not recognize the union as a bargaining agent. It was the first labor episode in which the federal government intervened as a neutral arbitrator.

The UMWA had won a sweeping victory in the 1897 strike by the soft-coal (bituminous coal) miners in the Midwest, winning significant wage increases and growing from 10,000 to 115,000. A number of small strikes took place in the anthracite district from 1899 to 1901, by which the union gained experience and unionized more workers. The 1899 strike in Nanticoke, Pennsylvania, demonstrated that the unions could win a strike directed against a subsidiary of one of the large railroads. [Blatz 1991] It hoped to make similar gains in 1900, but found the operators, who had established an oligopoly through concentration of ownership after drastic fluctuations in the market for anthracite, to be far more determined opponents than it had anticipated. The owners refused to meet or to arbitrate with the union; the union struck on September 17, 1900, with results that surprised even the union, as miners of all different nationalities walked out in support of the union.

Republican Senator Mark Hanna, himself an owner of bituminous coal mines (not involved in the strike) sought to resolve the strike, coming less than two months before the presidential election. He worked through the National Civil Federation which brought labor and capital together. Relying on J. P. Morgan to convey his message to the industry that a strike would hurt the reelection of Republican William McKinley, Hanna was able to convince the owners to concede a wage increase and grievance procedure to the strikers. The industry refused, on the other hand, to formally recognize the UMWA as the representative of the workers. The union declared victory and dropped its demand for union recognition.

The anthracite coal strike of 1902

The issues that led to the strike of 1900 were just as pressing in 1902: the union wanted recognition and a degree of control over the industry. The industry, still smarting from its concessions in 1900, opposed any federal role. The 150,000 miners wanted their weekly pay envelope. Tens of millions of city dwellers needed coal to heat their homes.

John Mitchell, the suave young President of the UMWA, proposed mediation through the National Civic Federation, a group that brought together progressive employers and unions and was committed to collective bargaining as a means of resolving labor disputes. In the alternative, Mitchell proposed that a committee of eminent clergymen report on conditions in the coalfields. George Baer, President of the Reading Railroad, one of the leading employers in the industry, brushed aside both proposals dismissively: 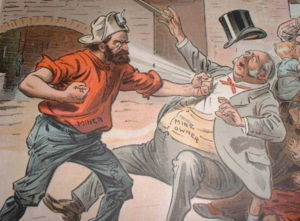 "Anthracite mining is a business, and not a religious, sentimental, or academic proposition.... I could not if I would delegate this business management to even so highly a respectable body as the Civic Federation, nor can I call to my aid . . . the eminent prelates you have named."

The miners struck on May 12, 1902. The maintenance employees, who had much steadier jobs and did not face the special dangers of underground work, walked out on June 2. The union had the support of roughly eighty percent of the workers in this area, or more than 100,000 strikers. Some 30,000 left the region, many headed for Midwestern bituminous mines; 10,000 returned to Europe. The strike soon produced threats of violence between the strikers on one side and strikebreakers, the Pennsylvania National Guard, local police and hired detective agencies on the other.

On June 8 President Theodore Roosevelt asked his Commissioner of Labor, Carroll D. Wright, to investigate the strike. Wright investigated and proposed reforms that acknowledged each side's position, recommending a nine hour day on an experimental basis and limited collective bargaining. Roosevelt chose not to release the report, for fear of appearing to side with the union.

The owners, for their part, refused to negotiate with the union. As George Baer wrote when urged to make concessions to the strikers and their union, the "rights and interests of the laboring man will be protected and cared for—not by the labor agitators, but by the Christian men to whom God in His infinite wisdom has given the control of the property interests of the country." The union used this letter to sway public opinion behind the strike.

Roosevelt wanted to intervene, but he was told by his Attorney General, Philander Knox, that he had no authority to do so. Mark Hanna and many others in the Republican Party were likewise concerned about the political implications if the strike dragged on into winter, when the need for anthracite was greatest. As Roosevelt told Hanna, "A coal famine in the winter is an ugly thing and I fear we shall see terrible suffering and grave disaster." 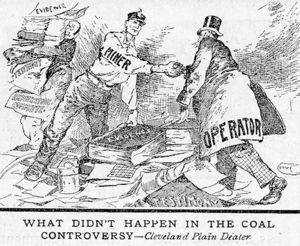 The two sides were supposed to listen to expert testimony and come to a friendly agreement; cartoon from the Cleveland Dealer

Roosevelt therefore convened a conference of representatives of government, labor, and management on October 3, 1902. The union considered the mere holding of a meeting to be tantamount to union recognition and took a conciliatory tone. The owners told Roosevelt that strikers had killed over 20 men and that he that he should use the power of government "to protect the man who wants to work, and his wife and children when at work." With proper protection they would produce enough coal to end the fuel shortage; they refused to enter into any negotiations with the union. The governor sent in the National Guard, who protected the mines and the minority of men still working.

Roosevelt attempted to persuade the union to end the strike with a promise that he would create a commission to study the causes of the strike and propose a solution, which Roosevelt promised to support with all of the authority of his office. Mitchell refused and his membership endorsed his decision by a nearly unanimous vote.

The economics of coal revolved around two factors: most of the cost of production was wages for miners, and if the supply fell the price would shoot up because in an age before oil and electricity, there were no good substitutes. Profits were low in 1902 because of an over supply; therefore the owners welcomed a moderately long strike. They had huge stockpiles which grew in value daily. It was illegal for the owners to conspire to shut down production, but not so if the miners went on strike. The owners welcomed the strike, but they adamantly refused to recognize the union, for then it would control the coal industry. 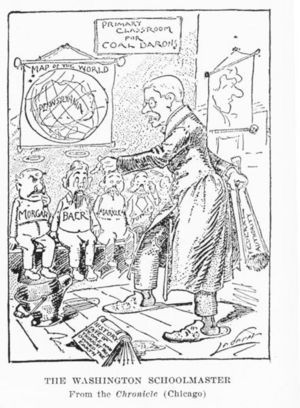 Roosevelt continued to try to build support for a mediated solution, persuading former President Grover Cleveland to join the commission he was creating. He also considered sending the U.S. Army to take over the coalfields; the wave of support for the strikers was alarming, and he feared that it presaged a broad public sentiment in favor of socialism.

J.P. Morgan, the dominant figure in American finance, had played a role in resolving the 1900 strike. He was deeply involved in this strike as well: his interests included the Reading Railroad, one of the largest employers of miners, and he had installed George Baer, who spoke for the industry throughout the strike, as the head of the railroad.

Now, at the urging of Secretary of War, Elihu Root, Morgan came up with another compromise proposal that provided for arbitration, while giving the industry the right to deny that it was bargaining with the union by directing that each employer and its employees communicate directly with the commission. The employers agreed on the condition that the five members be a military engineer, a mining engineer, a judge, an expert in the coal business, and an "eminent sociologist". The employers were willing to accept a union leader as the "eminent sociologist," so Roosevelt named E. E. Clark, head of the railway conductors' union, as the "eminent sociologist" and, after Catholics exerted pressure, added a sixth, Catholic bishop John Lancaster Spaulding, and Commissioner Wright as the seventh member.

The anthracite strike ended, after 163 days, on October 23, 1902. The commissioners began work the next day, then spent a week touring the coal regions. Wright used the staff of the Department of Labor to collect data about the cost of living in the coalfields.

The commissioners then held hearings over the next three months, taking testimony from 558 witnesses, including 240 for the striking miners, 153 for nonunion mineworkers, 154 for the operators and eleven called by the Commission itself. Baer made the closing arguments for the coal operators, while lawyer Clarence Darrow closed for the workers.

Although the commissioners heard some evidence of terrible conditions, they concluded that the "moving spectacle of horrors" represented only a small number of cases. By and large, social conditions in mine communities were found to be good, and miners were judged as only partly justified in their claim that annual earnings were not sufficient "to maintain an American standard of living."

Baer said in his closing arguments, "These men don't suffer. Why, hell, half of them don't even speak English". Darrow, for his part, summed up the pages of testimony of mistreatment he had obtained in the soaring rhetoric for which he was famous: "We are working for democracy, for humanity, for the future, for the day will come too late for us to see it or know it or receive its benefits, but which will come, and will remember our struggles, our triumphs, our defeats, and the words which we spake."

In the end, however, the rhetoric of both sides made little difference to the Commission, which split the difference between mineworkers and mine owners. The miners asked for 20% wage increases, and most were given a 10% increase. The miners had asked for an eight-hour day and were awarded a nine-hour day instead of the standard ten hours then prevailing. While the operators refused to recognize the United Mine Workers, they were required to agree to a six-man arbitration board, made up of equal numbers of labor and management representatives, with the power to settle labor disputes. Mitchell considered that de facto recognition and called it a victory.

The aftermath of the strike

Organized labor celebrated the outcome as a victory for the UMWA and unions generally. Membership in other unions soared, and moderate leaders gained more than the radical Socialists who denounced capitalism but were forced to the fringe of organized labor. Young John Mitchell proved his leadership skills and mastership of the problems of ethnic, skill, and regional divisions that had long plagued the union in the anthracite region. By contrast the Western Federation of Miners' strikes in the West often turned into full-scale warfare between strikers and both employers and the civil and military authorities. This coal strike was successfully mediated through the intervention of the federal government, which strove to provide a "Square Deal"—which Roosevelt took as the motto for his administration—to both sides. The settlement was an important step in the Progressive era reforms of the decade that followed. There were no more major coal strikes until the 1920s.