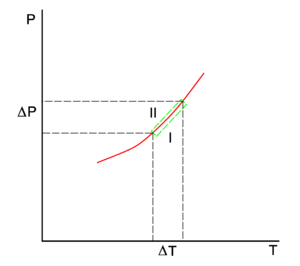 PD Image
The red line in the P-T diagram is the coexistence curve of two phases, I and II, of a single-component system. Phase I may be the vapor and II the liquid phase of the component. The lower green line gives the slope in phase I and the upper green line in phase II.

The Clausius-Clapeyron relation is an equation for a single-component system[1] consisting of two phases in thermodynamic equilibrium at constant absolute temperature T and constant pressure P. A curve in a two-dimensional thermodynamical diagram that separates two phases in equilibrium is known as a coexistence curve. The Clausius–Clapeyron relation gives the slope of the coexistence curve in the P-T diagram:

where Q is the molar heat of transition. It is the heat necessary to bring one mole of the compound constituting the system from phase II into phase I; it is also known as latent heat. For phase transitions with constant P, it is the molar transition enthalpy. For instance, when phase II is a liquid and phase I is a vapor, then Q ≡ Hv is the molar heat of vaporization (also known as molar enthalpy of evaporation). Further, V I is the molar volume of phase I at the pressure P and temperature T of the point where the slope is considered and V II is the same for phase II.

The equation is named after Émile Clapeyron, who published it in 1834, and Rudolf Clausius, who put it on firm thermodynamic basis in 1850.

The condition of thermodynamical equilibrium at constant pressure P and constant temperature T between two phases I and II is the equality of the molar Gibbs free energies G,

The molar Gibbs free energy of phase α (α = I, II) is equal to the chemical potential μα of this phase. Hence the equilibrium condition can be written as,

which holds everywhere along the coexistence (red) curve in the figure.

If we go reversibly along the lower and upper green line in the figure [the tangents to the curve in the point (T,P)], the chemical potentials of the phases, being functions of T and P, change by ΔμI and ΔμII, for phase I and II, respectively, while the system stays in equilibrium,

From classical thermodynamics it is known that

where Q is the amount of heat necessary to convert one mole of compound from phase II into phase I. Elimination of the entropy and taking the limit of infinitesimally small changes in T and P gives the Clausius-Clapeyron equation,

The Clausius-Clapeyron equation is exact. When the following assumptions are made, it may be integrated:

If phase I is a gas and the pressure is fairly low, this assumption is reasonable.

Under these condition the Clausius-Clapeyron equation becomes

where ln(P2/P1) is the natural (base e) logarithm of P2/P1. We reiterate that for a gas-liquid equilibrium Q = Hv, the heat of vaporization. 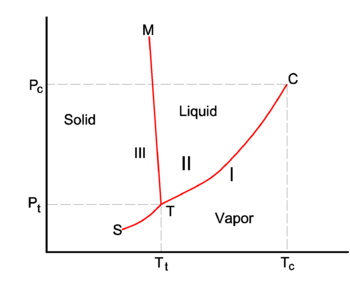 In the figure on the right an impression of part of the phase diagram of water (H2O) is shown. The three phases are: I (vapor), II (liquid) and III (solid). The Clausius-Clapeyron equation

gives the slope of the three coexistence (equilibrium, red) curves. The boiling line T-C has a positive slope, because the heat of vaporization Q = Hv is positive and the molar volume of the vapor V I is (much) larger than that of the liquid V II. For a similar reason the sublimation (transition from solid to vapor) line T-S has a positive slope. The sublimation line T-S is steeper than the boiling line T-C because the heat of sublimation is larger than the heat of vaporization, while in the neighborhood of crossing point T (the triple point) the difference in molar volumes is nearly equal. The melting line T-M has a negative slope, which occurs only for a few compounds (among them water). Consider

The molar volume VIII of the solid is larger than the molar volume VII of the liquid, while the enthalpy of melting Qmelt = SII−SIII > 0 (a liquid has a larger entropy than the corresponding solid, it costs energy to melt a solid). Compounds that have melting lines with negative slope, have a solid phase of lower density than the liquid phase. For example, it is very well-known that solid water (ice) floats on liquid water.