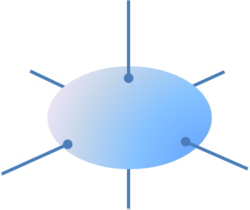 Clairaut's theorem, published in 1743 by Alexis Claude de Clairaut in his Théorie de la figure de la terre, tirée des principes de l'hydrostatique,[1] synthesized physical and geodetic evidence that the earth is an oblate rotational ellipsoid.[2][3] It is a general mathematical law applying to spheroids of revolution, and was initially used to relate the gravity at any point on the Earth's surface to the position of that point. His formula for the acceleration of gravity g in a place of latitude φ, was:[4][5]

(where a = semimajor axis, b=semiminor axis ).

This work was subsequently pursued by Laplace, who relaxed the initial assumption that surfaces of equal density were spheroids. [6] Stokes generalized the theorem further to apply to any law of density so long as the external surface is a spheroid of equilibrium.[7][8] A history of the subject, and more detailed equations for g can be found in Khan.[9]

The above expression for g has been supplanted by the Somigliana equation:

A formal mathematical statement of Clairaut's theorem is:[11]

Let γ be a geodesic on a surface of revolution S, let ρ be the distance of a point of S from the axis of rotation, and let ψ be the angle between γ and the meridians of S. Then ρ sin ψ is constant along γ. Conversely, if ρ sin ψ is constant along some curve γ in the surface, and if no part of γ is part of some parallel of S, then γ is a geodesic. — Andrew Pressley: Elementary Differential Geometry, p. 183

Pressley (p. 185) explains this theorem as an expression of conservation of angular momentum about the axis of revolution when a particle slides along a geodesic under no forces other than those that keep it on the surface.

The spheroidal shape of the Earth is the result of the interplay between gravity and centrifugal force caused by the Earth's rotation about its axis.[12][13] In his Principia, Newton proposed the equilibrium shape of a homogeneous rotating Earth was a rotational ellipsoid with a flattening f given by 1/230.[14][15] As a result gravity increases from the equator to the poles. By applying Clairaut's theorem, Laplace was able to deduce from 15 gravity values that f = 1/330. A modern estimate is 1/298.25642 [16] See Figure of the Earth for more detail.

For a detailed account of the construction of the reference Earth model of geodesy, see Chatfield. [17]