From Citizendium
(Redirected from Chordoepithelioma)
Jump to: navigation, search 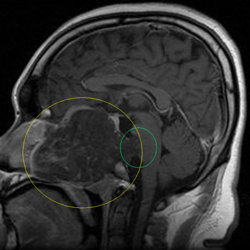 A chordoma (also known as choroid meningioma, chordocarcinoma, chordoepithelioma, or notochordoma) is a malignant tumor arising from the embryonic remains of the notochord.[1]

The term derives — in analogy of carcinoma — from the Latin word chorda for string and the Greek suffix -oma designating a swelling.

Chordomas are the result of abnormal tissue growth in remnants of the notochord. As such, they can occur anywhere in the bony tissue surrounding the spinal cord, with cranial, spinal and sacral tumours each representing about one third of the cases. The most common cranial location is in the clival region of the skull near the brainstem and the most common sacral lesion is in the body of the sacrum.[2]

The prevalence is about 1 in a million in the United States, and affected patients have an average life expectancy of five to ten years after diagnosis, with differences according to age of onset, gender and ethnicity.[3]

Chordomas are most frequently identified on the basis of MRI scans. They can also, with lower probability, be identified on CT scans, particularly if the tumour has grown considerably. Histologically, chordomas can be identified using a variety of immunohistochemical markers. 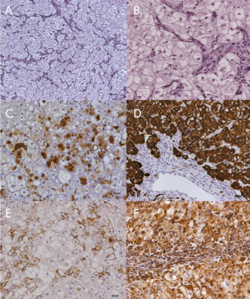 At least one susceptibility gene has been identified[4]

Some variants of chemotherapy — notably imatinib-based ones — can achieve partial response or static disease in some cases[5], and chordoma cell lines have been reported to be sensitive to several chemotherapeutics[6]. However, no cure is in sight. This leaves surgery as the main option of treatment[7], with prospects of success varying according to location.