The Chinese cobra (Naja atra), also occasionally known as the Taiwan cobra, is a medium sized venomous snake species belonging to the family Elapidae and found throughout southern and southeastern China including Hong Kong and the island province of Hainan and several neighboring nations and islands. It is a species of particular medical importance as it is responsible for many snakebites wherever it occurs. It is generally not an aggressive species, but its potentially lethal venom and habit of living in close proximity to humans make it a constant threat wherever it is found.

The Chinese cobra was first described by Danish physician, zoologist, and botanist Theodore Edward Cantor in 1842.[2] The generic name naja is a Latinisation of the Sanskrit word nāgá (नाग) meaning "cobra". The specific epithet atra comes from the Latin term ater, which means "dark", "black", or "gloomy".[3]

Body and hood of the Chinese cobra.

This medium-sized snake is usually 1.2 to 1.5 m (3.9 to 4.9 ft) long, but they can grow to a maximum length of 2 m (6.56 ft) though this is rare.[4] The Chinese cobra is iridescent black with a number of distant transversal double lines of a yellow colour. The abdominal surface is pearl or slaty coloured.[2] The dorsal color of the Chinese cobra is usually brown, grey or black,[5] with or without narrow, light transverse lines at irregular intervals which are especially prominent in juveniles.[4] The head on this species is broad, slightly triangular in shape and is slightly distinct from the neck. The dorsal scales are smooth and glossy, while the dorsolateral scales are strongly oblique. This is a heavy bodied snake, the body is slightly flattened, and may be significantly flattened when threatened, and it has a short tail. The nostrils of this species are large and prominent. The eyes are medium-sized and the iris is a dark dirty yellow dappled with gray-black or blue-black and the pupil is round and jet black. Like other elapids, this is a proteroglyphous snake with fangs that are permanently erect and are located at the anterior of the upper jaw. Its pair of fine grooved fangs are about 1-3 cm long. The upper head is usually the same color as the tail and dorsal part of the body, while the sides of the head are lighter in colour. Specimens with other colors on their dorsal surface, such as white, yellow or brown do occur. There may be irregular or scattered crosslines of white to light gray along the upper body and occasionally a spectacle marking on the hood, however, the hood markings may vary from partial figures to asymmetrical patterns (spectacle, mask, horseshoe or O- shape). The ventral head and neck are white to light gray or light orange in colour. The ventral face of the hood may have a pair of small dark spots followed by a dark transverse band.[5][6][3]

There is some variation in the colour of the ventral body and tail: it could be white to gray, dark gray mottled with white, or blackish. The populations in different geographic regions of Taiwan show a different composition of ventral colouration: the eastern population is all blackish (100%), the central and southern populations are mostly white to gray (both 80%), and the proportions of blackish and white-gray phases in the northern population are 60% and 30%, respectively.[3]

The Chinese cobra is sometimes confused with the Monocled cobra (Naja kaouthia). But it can be easily distinguished by virtue of having lower ventral and subcaudal scale counts, particularly when sex is taken into account.[5]

This species is found mostly in southeastern China from the mouth of the Yangtze river in the northeast part of its range to much of southern China (including the provinces of Sichuan, Fujian, Guangdong, Guangxi, Guizhou, Hunan, Hubei, Zhejiang, and the Island province of Hainan), Hong Kong, northeastern Laos, northern Vietnam, and Taiwan, where it is much more common in the south.[4][5][6][7] This species is sometimes listed as occurring in some northern areas of Thailand, but no specimens from this country have ever been observed.[8]

Its typical habitat is woodlands, shrublands, grasslands, and mangroves. This species is adaptable to a wide range of terrain including grassland plains, jungle, open fields and even heavily populated regions.[9] As an adaptable species, it occurs in a wide variety of habitats across its range. It can be found in rice paddy fields in maritime lowlands to various types of montaine forests, though it avoids dark forest with closed canopy. In primary monsoon season and rain forests, Naja atra inhabits clearings and riverbanks. Higher population density is observed in the vicinity of human settlements, in secondary forests, and in rice paddy fields which are adjacent to forests. The species can be found anywhere from sea level all the way up to elevations of more than 2000 m (6561.68 ft) above sea level.[7] It usually hides under leaves, sticks, and rocks.[6]

The Chinese cobra has a widely varied diet and it mainly preys on rodents, frogs, toads and other snakes.[9] It is active during both the day and night.[4][6] Preying on anything from amphibians to mammals to fish and other reptiles, this species is a feeding generalist. Juveniles eat mostly amphibians, whereas adults usually prefer reptiles and mammals - during amphibian breeding periods, however, adult cobras of this species eat mostly frogs or toads: the Cricket frog (Fejervarya limnocharis), the Common tree frog (Polypedates leucomystax), and the Asian common toad (Duttaphrynus melanostictus) are common prey.[7]

Like other species of cobra, it is an oviparous snake.[6][10] Mating and egg-laying periods are very extended. The species has been observed mating in the mountains of the western Tonkin region of Vietnam, at elevations of 400 to 2000 m (1,300 to 6,600 ft) above sea level in the months of March through May. As recorded, gravid females will lay between 6 and 23 eggs sometime between May through to the end of July. Females habitually protect their eggs until they hatch, in which case the hatchlings are completely independent - hunting and fending for themselves.[7] It takes roughly two months for the eggs to hatch. Hatchlings are 20 cm (7.87 in) in length when they hatch.[11] 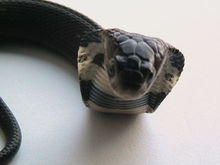 The venom of the Chinese cobra is very dangerous to man.

The Chinese cobra is a highly venomous member of the true cobras (genus Naja). Its venom consists mainly of postsynaptic neurotoxins and cardiotoxins. Four cardiotoxin-analogues I, II, III, and IV, account for about 54% of the dry weight of the crude venom and have cytotoxic properties.[12] The LD50 values of its venom in mice are 0.29 mg/kg IV,[13] and a range of 0.53 mg/kg[4] - 0.67 mg/kg[13] SC. The average venom yield from a snake of this species kept at a snake farm was about 250.8 mg (80 mg dry weight).[4] According to Minton (1974), this cobra has a venom yield range of 150 to 200 mg (dry weight).[9] Brown listed a venom yield of 184 mg (dry weight).[14] The distribution of the venom of the Chinese cobra has been studied in mice using a whole-animal radiographic technique. Results indicate that venom accumulates primarily in the kidney (marked localization in the cortex) with little or no activity in the brain of mice sacrificed one to two minutes after intravenous injection of massive dose levels of venom. Using I-labelled cobra venom (Naja atra), 1 μg/g mice, its isolated I-neurotoxin (0.2 μg/g) or cardiotoxin (4 μg/g), it has been found that, after subcutaneous injection into the thigh, the neurotoxin was more rapidly absorbed than either crude venom or cardiotoxin.[14] Although this is not a spitting cobra, some rare individuals (mostly specimens from Guizhou Province) are capable of ejecting venom towards a threat within a distance of 2 m (6.56 ft).[4][6] Untreated bite mortality rates can vary, but generally untreated mortality rates are not lower then 10%. In Taiwan there were 593 recorded cases of envenomation by the Chinese cobra from 1904-1938, of those 87 cases were fatal which is a 15% mortality rate. This is higher than mortality rates usually acquired through studies for Naja naja (the Indian cobra).[14]

Local symptoms in victims caused by a Chinese cobra bite are wound darkening, localized redness and swelling, pain, insensibility, and invariably blisters and necrosis. Necrosis is a serious problem in cases of cobra bite as it may persist for many years after the general recovery of the victim. The following systemic symptoms may also occur: chest discomfort, fever, sore throat, difficulty in swallowing, loss of voice, weak feeling in limbs, walking haltingly, general ache, lockjaw, and difficulty in breathing. Fatality occasionally occurs.[4] The antivenom is widely available and deaths are much rarer than they used to be.