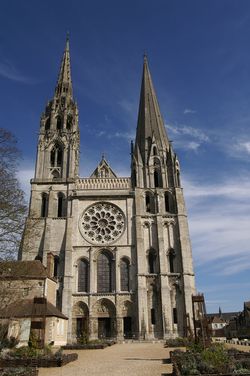 Chartres is a town in France and according to official figures from 2009 it has a municipal population of 39,000.[1] It sits on the River Eure some 80km south west of Paris.[2] There has been human activity in the area since the Neolithic. In the 2nd century B.C. the settlement was the capital of the Carnutes tribe [3] The Romans called the town Autricum, derived from their name for the River Eure (Autura) but it was also called Carnuntum after the Carnutes tribe. Christianity probably became the town's main religion sometime in the 4th century A.D. and became the seat of the Bishop of Chartres in the 5th century.[2] The present Cathedral at Chartres dates from the 12th and 13th centuries and is now a UNESCO World Heritage Site.[4]