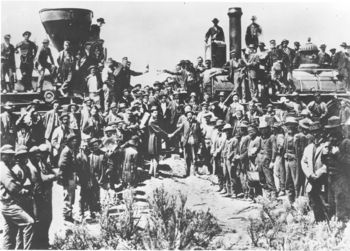 The Central Pacific Railroad was the California-to-Utah portion of the First Transcontinental Railroad in North America. It connected to the new Union Pacific and when it opened in 1869 afforded through trains from California to Omaha and points east. It dramatically unified the Far West with the national economy and opened the interior west to settlement. 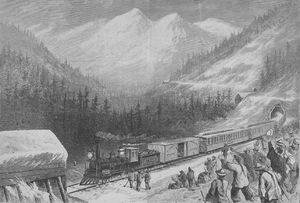 (PD) Engraving: Joseph Becker
A winter scene with a Central Pacific Railroad train emerging from a snow shed in the Sierra Nevadas as Chinese workers cheer. Snow-covered hills and mountains can be seen in the distance.

In the 1850s proposals to build a transcontinental failed because of the disputes over slavery in Washington; with the secession of the Confederate states in 1861, the modernizers in the Republican party took over Congress and passed the necessary legislation and subsidies. It was planned by Theodore Judah, as the chief engineer. He surveyed the route over the Sierra Nevadas along which the railroad was eventually built during the 1860s. Failing to raise funds in San Francisco, he was successful in signing up four local merchants--the "Big Four" who actually built the Central Pacific. Judah's tireless and inspirational lobbying efforts in Washington were largely responsible for the passage of the 1862 Pacific Railroad Act, which authorized construction of both the Central Pacific and the Union Pacific )which built west from Omaha). After passage of the 1862 Act, the Big Four (Leland Stanford, Collis Huntington, Charles Crocker, and Mark Hopkins) increasingly marginalized Judah and they put Crocker in charge of construction. Construction was completed in 1869, but only a small part of the railroad followed Judah's plans. Much of the labor force were Chinese immigrants. The first rails were laid in 1863 and the golden spike, connecting it to the Union Pacific railroad to Omaha, Nebraska, was hammered on May 10, 1869, touching off a national celebration. Coast-to-coast passenger travel in 8 days now replaced wagon trains or sea voyages that took 6 to 10 months and cost much more.

The road was built with mortgages from New York, Boston and London, backed by land grants. There were no federal cash subsidies; instead the federal government offered land-grants in a checkerboard pattern. The railroad sold every-other square, with the government opening its half to homesteaders. The government also loaned money--later repaid--at $16,000 per mile on level stretches, and $32,000 to $48,000 in mountainous terrain. Local and state governments also aided the financing. In 1885 the Central Pacific Railroad was leased by the Southern Pacific Railroad, though it technically remained a corporate entity until 1959 when it was formally merged into Southern Pacific. The original right of way is now part of the Union Pacific which purchased Southern Pacific in 1996. 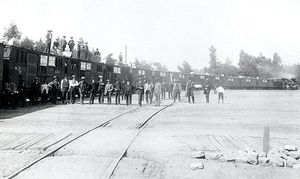 Fleisig, (1975) questions whether promoters of the Central Pacific Railroad were oversubsidized. Confirms the traditional view that subsidies were not an economic necessity because they "influenced neither the decision to invest in the railroad nor the speed of its construction." Notes that estimates of rate of return for the railroad developers using government funds range from 71% to 200%, while estimates of private rates of return range from 15% to 25%. Mercer(1970) analyzes the impact of land grants, during 1864-90, on rates of return from investment in the Central Pacific Railroad. Results suggest that even without land grants, rates of return were high enough to induce investment. Also, land grants did not pay for the construction of the railroad. Land grants, however, did produce large social returns in western states by accelerating construction of the system. Mercer (1969) uses econometrics to determine the values of railroad land grants of the 19th century to the railroads and to society as a whole. The author summarizes and criticizes previous treatments of this subject and then discusses his own findings. Using only the Central Pacific and the Union Pacific systems as the basis for his investigation, the author concludes that the railroad owners received unaided rates of return which substantially exceeded the private rate of return on the average alternative project in the economy during the same period. Thus the projects turned out to be profitable although it was generally expected by contemporary observers that the roads would be privately unprofitable without the land grant aid. The land grants did not have a major effect, increasing the private rate of return only slightly. Nevertheless, it is contended that the policy of subsidizing those railroad systems was beneficial for society since the social rate of return from the project was substantial and exceeded the private rate by a significant margin.

Tutorow, (1970) argues Stanford and Big Four paid lip-service to the idea of free competition but in practice sought to destroy or weaken competing railroad and shipping lines. Focusing on the years between the completion of the first transcontinental railroad line (1869) and Stanford's death (1893), Tutorow shows how Stanford and the Central Pacific associates repeatedly entered into pooling arrangements to prevent competition, brought out competitors, or forced rivals to agree not to compete with them. He concludes that Stanford and his partners viewed laissez-faire as applicable only to government controls and not to destruction of competition within the system by those inv

Kraus, (1969) shows how Chinese railroad workers lived and worked, how they managed the finances associated with their employment, and concludes that Central Pacific officials responsible for employing the Chinese, even those at first opposed to the policy, came to appreciate the cleanliness and reliability of this group of laborers. Kraus provides many quotations from accounts by contemporary observers. Ong, (1985) tries to resolve the apparent inconsistency in the literature on Asians in early California, with contradictory studies showing evidence both for and against the exploitation of Chinese labor by the Central Pacific Railroad, using monopsony theory as developed by Joan Robinson. Monopsonists are buyers whose share of the market is large enough to affect prices, or whose supply curves are not completely elastic. By setting different wages for whites and Chinese - each having different elasticities of supply - and using Chinese in the menial and dangerous jobs, with whites in the better positions, the two groups were complementary rather than interchangeable. Calculations thus prove higher levels of exploitation of the Chinese than in previous studies. 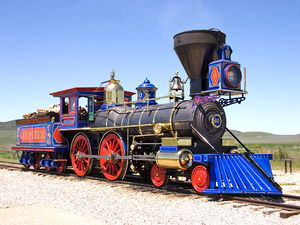 A replica of the Sacramento, California Central Pacific Railroad passenger station is part of the California State Railroad Museum, located in the Old Sacramento State Historic Park. Two of the company's first locomotives, the Gov. Stanford (No. 1), and C. P. Huntington (No. 3), are housed at the same museum. Nearly all of the company's early correspondence is preserved at Syracuse University as part of the Huntington papers collection, released on microfilm (133 reels). The following libraries have this microfilm: University of Arizona at Tucson; Virginia Commonwealth University at Richmond. Additional collections of manuscript letters are held at Stanford University and the Mariner's Museum at Newport News, Virginia.