This page contains standards and regulations related to Code subpages.

What are Code pages?

In these pages, users should upload the codes used to create CZ articles; especially tables and images. The code can be a scrypt designed for some specific operation system interface, as well as source in some of widely used programming languages: Postscript, LaTeX, Mathematica, Maple, Matlab, C++, Fortran, Assembler, etc.

Long pieces of code are usually next to useless in a general purpose encyclopaedia. Short codes can be used as a complement (but not a substitute) of the description of the figure, allowing to understand all the details: what is plotted and how it is plotted. Therefore, the codes should be optimized for their length and human readability (not for CPU time). The code should allow a user to reproduce the figure and to modify it.

Usually, the code is easier to read, if it is formatted as sequence of lines. In order to provide such formatting, each new line should begin with spacebar (character with decimal ascii number 32). At the header, it desirable to specify, what does the code do. It may be good idea, to specify the header as a "comment" in such a way, that it has no need to be removed before the compillation or execution of the code. All the codes are supposed to be in ascii; special unicode characters are allowed only if their use is essential, for example, illustrating a text in a foreign language. In particular, the Mathematica and Maple codes should be converted to ascii (plain text) before saving.

Editing of codes after the last test-run is not recommended at all. Small error (for example, O instead of 0, or I instead of |, any specific unicode character that look identical to some ascii character) may affect the execution of code, while is difficult to detect at the visual revision.

The proof of significance of a code is that it generates some content, used in CZ. It is desirable to indicate, what pictures of tables were generated using the code. If used many times, it may worth to indicate the tree. Such a specification may look like a poem This Is the House That Jack Built, being something like this:

This code is Programs/FFT/simple/FFT.cin
That is used as a function, is inputted in
Programs/FFT/example.cc to generate the file

File:Fast Fourier Transform figure 3version02.jpg that is used, for a while

by the Fast Fourier Transform
by Fourier Analysis
by Periodic Functions

and by Table 1 in the article

... and so on. (Now some of files mentioned above are absent, but they may appear in future.)

Such an indication (if all clickable) makes it easy to check that the code is essential for the CZ, and without such a content, the encyclopedy cannot be considered as self-consistent.

Imges that use the downloadable codes 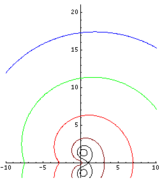