PostScript (PS) is a programming language designed for description of two-dimensional objects for visual observation by humans, characterized in that, that, in order to avoid the use of the group operation (parenthesis), the command (operator), in general, appears after the operands. PostScript is standard format for presentation of illustrations at the electronic submission of figures for the publication is the scientific journals.

should be displayed. Values should be substituted instead of variables

for the execution. Usually,

, but some advanced software recognizes also positive and sometimes even negative values of these parameters. At

, view of the image depends on the software used to interpret the EPS file; this can be used to reduce the portability of the image, allowing the viewing only with some specific software. 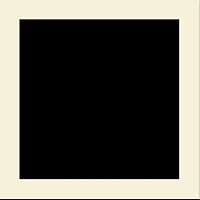 Typically, the postscript uses the analytical description of figure with simple objects (straight lines, circles and arcs of circles and ellipses, polygons); similar representation is used also for letters. This allows the compact description of data and the strong (sometimes, orders of magnitude) zooming-in, keeping the camera-ready quality of the figure. Some images allow efficient representation through the EPS format. For example, the code below reproduces the famous painting Black Square [1][2] by Kazimir Malevich (originally implemented with oil on canvas):

The bitmap representation of data is also supported, although for the roster representation, the advantages of the postscript are not so obvious. The syntax of postscript allows to generate the simple images with few lines, for example, the code

generates the figure shown at right. In the code above, the line with sequence "5a5a" produces the two vertical sticks at the top of the image.

The more complicated example with description can be found at [3].

Basic elements of the image 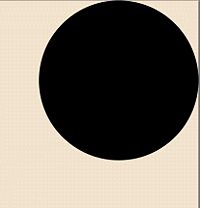 EPS version if the painting Black Circle by K.Malecivh

In Postscripts, the basic elements are lines and arcs.

The painting Black Circle can be generated with code 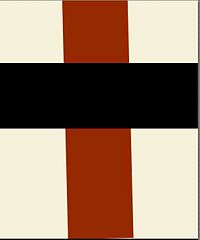 Even few lines can produce a product of art. For example, the reproduction (see the figure) of the painting Supermatizm by K.Malevich can be generated with the EPS code below:

The postscript figures can be included in to the LaTeX texts. One writes the command

at the top of the latex soure; then, the command

In some cases, (for example, at work with Latex and DVI files) the postscript figures can be used directly; for other applications, for example, to include an image to a webpage, the postscript file should be converted to jpg or other acceptable format. In particular, the reproductions of the paintings by Malevich above were converted from EPS to jpg before the uploading.