Clive Staples Lewis, known as C.S. (Jack) Lewis, (November 29, 1898 – 22 November 1963) was a Northern Irish writer, scholar and lay theologian. He became known as one of the most important Christian apologists of the 20th Century.

Lewis had a distinguished academic record, and was a respected scholar and critic in the fields of Medieval and Renaissance literature. He was also a prolific writer. His work became more widely known later in his life when he broadcast religious talks on radio. Many of his writings were published in posthumous collections, which introduced his work to succeeding generations. According to Bruce L. Edwards “Indeed, more Lewis volumes—collection of essays, chiefly—have appeared after his death than during his lifetime.”[1]

Today, C.S. Lewis’s best known and most influential works are probably Mere Christianity, a book based on his series of World War II radio broadcasts, and The Chronicles of Narnia, a seven-book fantasy series describing the adventures of children from our world in Narnia, a mythical kingdom. The Narnia Books have been consistent best sellers and are the subject of a surge of current interest due to Disney filmed versions of the works.

Lewis’s personal life is noteworthy because he spent a significant portion of his life as an atheist, and even following his conversion to Christianity, his religious writing reflects many of the non-Christian influences in his life, and he wrote frankly about his personal experiences with doubt, lack of faith, and anger directed against God.[2] 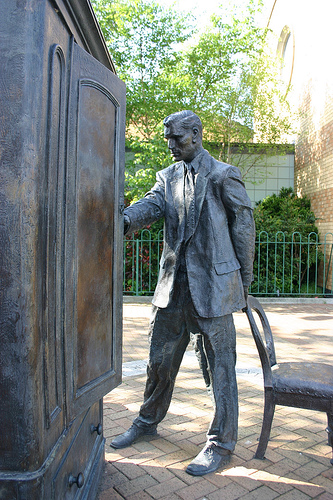 (CC) Image: genvessel
a statue located in Northern Ireland of Lewis looking into a wardrobe.

C.S. Lewis was born in Belfast, Ireland (now Northern Ireland), into an educated family with a religious background. He had one elder sibling, Warren ("Warnie") Lewis, with whom he remained friends for life. His childhood was happy; he was a bookish boy with a vivid imagination. He and his brother spent many hours creating their own imaginary world: Boxen, a world populated by anthropomorphic animals. His precocious childhood is further illustrated that upon the death of his dog he insisted upon taken the dog's name, “Jacksie," upon himself. While this was latter shortened to “Jacks” and finally to “Jack”, he went by this name for the rest of his life. But his childhood was also to be marked by tragedy. His beloved mother fell ill and died of cancer when he was just nine years old and his life was changed forever. Unable to handle this loss, his grieving father sent his sons away to boarding school, where, due to caused ranging from an insane headmaster to the strict and often brutal hierarchy imposed on younger boys by elder boys at such schools, Lewis was often miserable.

Lewis entered University College, Oxford, on a scholarship in 1917 (1916?). He left to volunteer in World War I, but returned, having been injured by shrapnel, and remained at Oxford (first as student, then as teacher) for over 30 years. He graduated with three Firsts and following graduation he was given a teaching post at Magdalen College, Oxford University 1925.