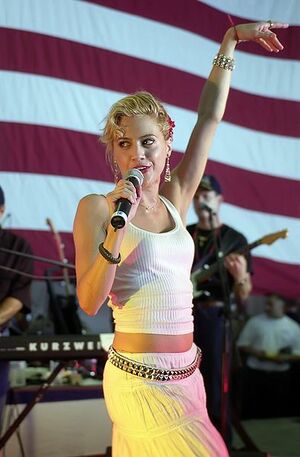 The talented singer and actress entertained troops aboard an aircraft carrier in 2003.

Brittany Anne Murphy-Monjack (November 10, 1977 – December 20, 2009), known professionally as Brittany Murphy, was an American actress and singer who died at age 32. Murphy's death was ruled to be an accident by a Los Angeles coroner and was primarily caused by pneumonia. However, there were findings that anemia and prescription drugs may have played a role in the death of the actor who once starred in films such as Drop Dead Gorgeous, Girl, Interrupted and Deadline, leaving some questions unanswered.[1] Murphy's husband Simon Monjack and Murphy's mother claimed that the actress had been experiencing "flu-like symptoms" days before she collapsed in her home in the Hollywood Hills.[1] A report in BBC News suggested that the actress could have survived "if she had seen a doctor in time".[2] Murphy had no children, although there was a report in the Huffington Post claiming that Murphy had "wanted to become a mother soon."[3] The in-demand actress had hit film vehicles such as Clueless and Riding in Cars with Boys as well as doing voice-over work and starring in numerous television shows. Her final film Something Wicked was released posthumously in early 2013.

Brittany Anne Murphy[4] was born in Atlanta, Georgia, on November 10, 1977. Her parents, Sharon Kathleen Murphy[5] and Angelo Bertolotti, divorced when she was two years old, and Murphy was raised by her mother in Edison, New Jersey, where she attended Edison High School, the same high school actress Susan Sarandon attended. Time Magazine reported that the young Murphy persuaded her mother to move to Los Angeles so she could pursue a movie career.[6][7][8][9] Murphy said her mother never tried to stifle her creativity, and she considered her mother a crucial factor in her later success: "When I asked my mom to move to California, she sold everything and moved out here for me. … She always believed in me."[10] Murphy's mother is of Irish and Eastern European descent and her father is Italian American.[11][12] She was raised a Baptist and later became a non-denominational Christian.[13][14]

Murphy landed her first job in Hollywood when she was 14, starring as Brenda Drexell in the series Drexell's Class. She then went on to play Molly Morgan in the short-lived The Torkelsons spinoff Almost Home. Murphy also guest-starred on several television series.

Murphy starred in many films (see filmography below). Film critic Roger Ebert gave positive reviews and compared her to Lucille Ball.[16] In 2009, she was cast in the TV movie, Tribute, as the main character, Cilla. She was set to appear in the Sylvester Stallone film, The Expendables, which will be released in 2010.[10]

Murphy was a critically acclaimed voice actor. Time reporter Richard Corliss described her as a "hot property" regarding the "specialized field of voice work for cartoons."[6] She did the voice role of character Luanne Platter on the animated sitcom King of the Hill[6] for the entirety of the show's run beginning in 1997. She also did the voice of Gloria the penguin in the 2006 feature Happy Feet. She was nominated for an Annie Award for voice acting in the King of the Hill episode "Movin' On Up."[17] Corliss described Murphy's talent as a voice actor:

Murphy completed her last film, the thriller/drama Abandoned, in June 2009. The film is scheduled for release in 2010.[18]

In November 2009, Murphy left the production of The Caller, which was being filmed in Puerto Rico, and was replaced by Rachelle Lefevre. Murphy denied media reports that she had been fired from the project after being difficult on the set, and cited "creative differences".[19] There were reports that she was "fired from one movie" and that her recent career had been "marked by trouble" and that she had been "addled while shooting another" film.[6] 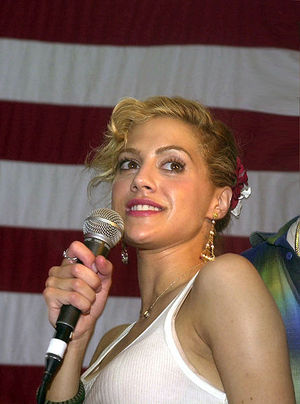 Murphy performing for the crew during a United Services Organization show aboard USS Nimitz in 2003.

She was in a band called Blessed Soul with fellow actor Eric Balfour in the early 1990s. On June 6, 2006, Murphy and Paul Oakenfold released the single "Faster Kill Pussycat," from the album A Lively Mind. The song became a club hit, and hit number one on Billboard's Hot Dance Club Play chart.[20] It also hit number seven in the UK singles chart in June 2006.[21]

She dabbled in music again with the release of the film Happy Feet, in which she covered Queen's song "Somebody to Love" and Earth, Wind & Fire's "Boogie Wonderland." She also starred in a video by Wheatus entitled A Little Respect alongside actor Shawn Hatosy. She also appeared in the music video for Luscious Jackson's "Here" and Tears for Fears "Closest Thing to Heaven."[22] In 2005, Murphy signed as the spokesmodel for Jordache jeans.[23]

In late 2002, Murphy began dating fellow actor Ashton Kutcher with whom she had co-starred in the film Just Married.[24] Once engaged to talent manager Jeff Kwatinetz, Murphy became engaged to Joe Macaluso in December 2005, a production assistant she met while working on the film Little Black Book.[25] In August 2006, they ended their engagement.[25] In May 2007, Murphy married British screenwriter Simon Monjack in a private Jewish ceremony in Los Angeles.[26] For the last three and a half years of her life, Murphy, her mother and Monjack lived in the same house together.[27]

At 8pm on December 20, 2009, the Los Angeles Fire Department responded to "a medical request"[28] at the Los Angeles home Murphy and Monjack shared. She had apparently collapsed in a bathroom.[10] Firefighters attempted to resuscitate Murphy on the scene. She was subsequently transported to Cedars-Sinai Medical Center, where she was pronounced dead on arrival[29] at 10:04 after going into cardiac arrest.[10][28] Shortly after her death, Assistant Chief Coroner Ed Winter told the Associated Press: "It appears to be natural."[30][31][32] An autopsy was performed on December 21, 2009. Her death certificate listed the cause of death as "deferred".[33] On February 4, 2010, the Los Angeles County coroner stated that the primary cause of Murphy's death was pneumonia, with secondary factors of iron-deficiency anemia[2] and multiple drug intoxication.[1] On February 25, 2010, the coroner released a report stating that Murphy had been taking a range of over the counter and prescription medications, with the most likely reason being to treat a cold or respiratory infection. These included "elevated levels" of hydrocodone, acetaminophen, L-methamphetamine and chlorpheniramine. There was a report that Murphy had been taking an anti-seizure drug, obtained with a legal prescription, but "did not abuse her medication."[2] Iron deficiency anemia is the most common type of anemia, and happens when a person's diet has an insufficient amount of iron.[2] All of the drugs were legal and the death was ruled to be an accident, but the report observed: "the possible adverse physiological effects of elevated levels of these medications cannot be discounted, especially in her weakened state".[34] After the death was reported, it became a worldwide media sensation, leading to speculation that the death was an overdose from drugs and inviting comparisons to the untimely early deaths of other actors such as Heath Ledger. A Saturday Night Live skit which had aired on December 5, 2009, weeks before Murphy's death, which "satirized the actress", was pulled from web sites out of respect.[35]

There was a report in the Newark Star-Ledger that Simon Monjack blamed Warner Brothers studios for causing conditions leading up to her death, including firing Murphy from the role of the penguin "Gloria".[36] Monjack was quoted as saying:

There was a report that Monjack planned to sue; one studio executive surmised that the jostling for the penguin role between Murphy and another actor, Rachelle Lefevre, may have been behind the decision to replace Murphy.[36] There was a report in USA Today that Brittany Murphy's will excluded her husband from "everything" and that all of the late actress's assets were given to Murphy's mother, and that her husband had consented to this choice.[37]

Murphy was buried at Forest Lawn Hollywood Hills cemetery on December 24, 2009.[38][39] A report in the Huffington Post described Murphy's husband Monjack as having had a "checkered past", but there was no evidence of foul play.[3] There were reports that Monjack had a "long trail of shady dealings" including two apartment evictions for failure to pay back rent, a $470,000 judgment against him by a British investment bank, a $50,000 lawsuit from his ex-wife.[3]

Director Michael Feifer described Murphy as "professional, kind and healthy."[38] A San Francisco Chronicle film critic Mick LaSalle commented on the unfortunate death of the talented actress. He wrote: {{quote|Every year, at the Oscar ceremony, the recent dead are remembered through film clips, and it's always a little uncanny, because it reminds you how movies stop time, but don't; how people seem there, but aren't. There's a cruelty in that, and a beauty, too, and it's confusing to take it all in. But it's in those moments, I think, that we come to realize, if only subliminally, how we always come ahead on the exchange. Men and women do everything they can to become movie stars, and those that succeed live lives of adulation and privilege. But to achieve that success, they have to give themselves to us. And when it's all over, we still have them, and they don't even have themselves.[40]

In January 2010, Sharon Murphy, Murphy's mother, and husband Simon Monjack established the Brittany Murphy Foundation, a charitable fund for raising funds for children's arts education, as well as supporting the USO and cancer research.[41] The Foundation was officially launched on February 4, 2010 at an event at the Saban Theatre in Beverly Hills where Monjack requested donations of $1,000 per person and $10,000 per corporation to attend.[42][43]