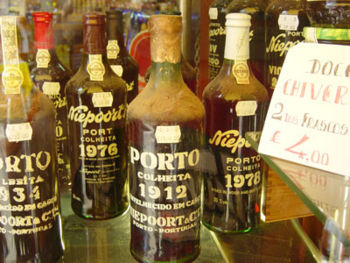 A bottle is a typically small storage container for liquid. Unlike jugs, casks, and drums, they hold a moderate amount and are intended for short term storage of items in frequent, usually household use, although alcoholic beverages and other preserved items can be stored in bottles for years. The word bottle was originally a French word which entered into English use as early as the 1300s.[1]

Bottles have been in use for centuries. The earliest ones were typically made of leather, wood, earthenware, or metal;[2] the majority of modern ones are made of glass or plastic. The shape varies from bulbous to cylindrical, but a characteristic of bottles is a narrower neck than body. They can range from tiny--for perfume and medicine, for example--to rather large--for large novelty bottles of wine[3] and other alcoholic beverages. Because they are intended to hold liquid, it is important that bottles be made of materials that do not seep, and preferably ones which do not lend chemicals or tastes to the liquid contents. Glass bottles have particular significance; they are non-porous and durable, and unless cracked or broken can store items for years. Many glass bottles are now collectibles.

Other uses of "bottle"

The word bottle may be used as an adjective, as in the colour bottle green, from the common colour of bottle glass.

The word may also be used as an imperative, as in bottle it!, meaning be quiet. The related terms "put a cork in it!" and "cork it!" also refer to bottling. One can speak of bottling up emotions, which means to hold them in.

Hit the bottle menas to start drinking alcohol excessively, to binge-drink alcohol, to "tie one on".

Messages in a bottle 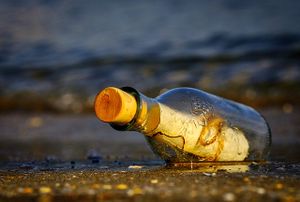 Message in a bottle

The earliest recorded sender of a message in a bottle was the Greek philosopher Theophrastus, considered the father of botany. Theophrastus launched his messages in bottles around 310 BCE, to himself, to demonstrate that the Atlantic flowed into the Mediterranean. Benjamin Franklin replicated this experiment to create his charts of sea currents (in particular the Gulf Stream) in the mid-1700s. Queen Elizabeth I received messages from her fleet in bottles during hostilities with the Spanish; these messages were so important that she created the post of 'Uncorker of Bottles'

"Message in a Bottle" is a 1979 popular song by the band The Police. In the song, a castaway, stranded alone on an island, sends a message in a bottle, in hopes of being rescued. After more than a year passes he suddenly finds "a hundred billion bottles washed up on the shore" of the island, all from people who are similarly alone and stranded. Obviously there is a fair amount of poetic license taken in the song lyrics: the entire population of the world was only between 4 and 5 billion at the time the song was released, and that many bottles would not fit on a small island shore or all arrive together on the same day. 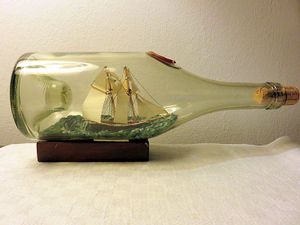 Ship in a bottle (Gaff schooner)

The placement of miniature ships inside bottles has been going on since the late 18th century with the earliest known example from 1784. However prior to this many other things were placed in bottles, for example crucifixes in bottles have been found as early as the 16th century. Although displayed mainly for decoration nowadays the original reason for placing things in bottles is regrettably unknown.[4] 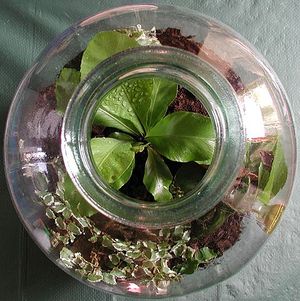 Garden in a bottle

A bottle garden is a specialised type of container garden, in which seeds or small plants are planted inside a bottle and become too large to fit through the bottle's opening.

1767: Joseph Priestly found that the water easily absorbed the gas later identified as carbon dioxide. Priestly published his findings in a paper titled "Directions for Impregnating Water with Fixed Air".

1873: the ball stoppered bottle closure referred to as the "Coda stopper", was patented in the U.S. by Hiram Cold of England.

1879: Charles G. Hutchinson, the son of a Chicago bottler invents a spring-type internal bottle closure known as the "Hutchinson Stopper"

1971 The Oregon Bottle Bill was the first container deposit legislation passed in the USA. It requires carbonated soft drink and beer containers sold in Oregon to be returnable with a minimum refund value.