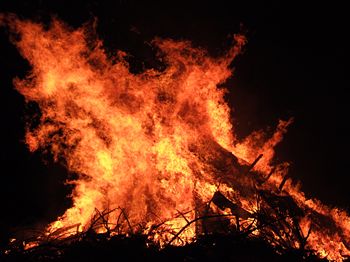 (CC) Photo: Mark Morton
Bonfires are lit all over the UK to mark the 1605 attempt to destroy the English parliament.

Bonfire Night, also known as Guy Fawkes Night or Fireworks Night, is a national celebration held every 5th November in the United Kingdom and some Commonwealth countries to mark a failed attempt in 1605 by several Catholic conspirators, notably Guy Fawkes, to blow up the Houses of Parliament and assassinate the Protestant James I. The failure of this 'Gunpowder Plot' is marked across the UK with bonfires on which an effigy of Guy Fawkes is burnt, along with fireworks displays. Several traditional foods are also eaten, including toffee apples and baked potatoes. Often the event spills over into the days and even weeks either side: as fireworks go on sale, it has become increasingly common to hear them being set off well before the event, and also around Halloween a week earlier. This is partly due to family breakdown: many children have a fireworks night with each parent.

The day was listed as Papists Conspiracy day in the calendar of the Church of England's Book of Common Prayer until 1859. Nowadays, however, despite the event's roots in the centuries-long battle between the Catholic and Protestant branches of Christianity, there is little sectarian association with the event in most parts of the UK. The most controversial aspect of Bonfire Night is the sale of fireworks, which has been increasingly restricted in recent years due to injuries and occasional deaths involving fireworks and fire. Additionally, many pet owners complain that their animals, dogs in particular, are frightened by the noise of the fireworks. The Royal Society for the Prevention of Cruelty to Animals (RSPCA) recommends that pets be kept indoors in the evenings around Bonfire Night.[1] Hedgehogs are also at risk, as they can set up home in bonfires as they are built.[2]