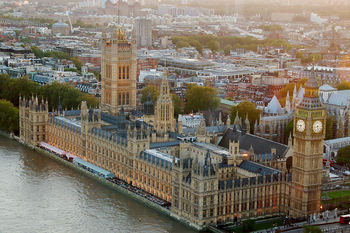 (CC) Photo: Tahir Hashmi
The Palace of Westminster from above

The Palace of Westminster, also known as the Houses of Parliament, was built between 1840 and 1870 and is the meeting place of the United Kingdom Parliament. The present build was designed by Charles Barry and replaced an earlier palace which was destroyed in a fire of 1834.[1] In 1987 the Palace of Westminster along with Westminster Abbey and Saint Margaret's Church became designated a World Heritage Site by UNESCO, recognising the importance of the buildings.[2] From the reign of Edward the Confessor, Westminster Palace was the primary residence of the kings of England until 1512 when it was badly damaged by fire.[3]