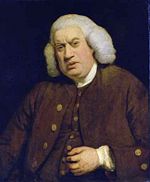 Dr. Samuel Johnson, a man who wrote only for money, by Sir Joshua Reynolds, 1772

"No man but a blockhead," the august lexicographer Dr. Samuel Johnson famously declared in 1766, "ever wrote, except for money." [1] Within 50 years he was to be disproved by Byron, who initially thought it beneath his dignity to accept money for his best-selling poems, though under pressure of debts he changed his mind later. Another exception was the American poet Emily Dickinson, who published virtually nothing during her lifetime; but on the whole Johnson's assertion has held true until the latter part of the 20th century, when new technologies have both permitted — and encouraged — innumerable people to write for reasons other than monetary gain. The personal computer, word processing programs, print on demand publishing, the Internet, and wikis are among the innovations that have revolutionized the ways in which millions of people can now channel their creative forces.

Subsidy presses, better known as vanity presses, have long existed; here a would-be author pays a company the often-substantial expenses of publishing his book without hope of recouping his investment. In electronically created print on demand publishing, however, that same author might arrange with a specialty publishing company such as Wildside Press to prepare his manuscript in book form at no charge to the author; when an order for the book is received, a single book is sold, printed, and delivered to the customer. In contrast to paying a vanity press for publishing his work, however, the author eventually receives a royalty on the sale of the single book. Similarly, an author will receive royalities from the sale of so-called e-books, electronic copies of his work that are downloaded by a paying customer from an Interet source.

Blogs are perhaps the prime example of creative writing that exists today with little expectation of their authors ever receiving any financial rewards. Across the world, millions of people daily post records of their thoughts, opinions, experiences, and personal lives onto Internet sites that are then accessed, and frequently commented upon, by millions of other people.

Another recent phenomenon are Internet wikis, which permit thousands of people around the world to collaborate on joint projects such as the creation of online encyclopedias and indexes. Even though their efforts are not recompensed in any material way, many credentialled experts and knowledgeable laypeople are making long, erudite, and altruistic contributions to various wiki-driven projects. Their reward, apparently, is the intangible satisfaction that derives from the expectation that their contribution will live on for the enlightenment of future users. The most prominent wiki at the moment is Wikipedia, but there are many others such as Citizendium and ISFDB, the Internet Speculative Fiction Database.