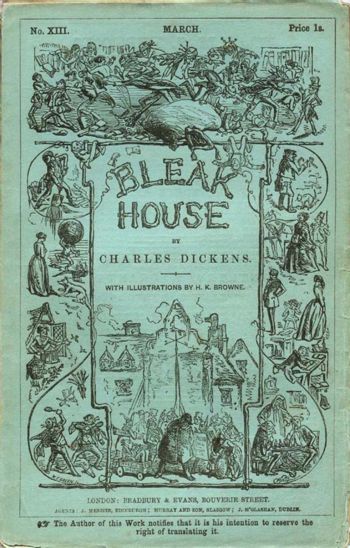 Wrapper from the serialized publication of Bleak House with illustrations by Phiz, 1853.

Bleak House is the ninth novel by Charles Dickens, published in 20 monthly parts between March 1852 and September 1853. The plot concerns a long-running legal dispute (Jarndyce and Jarndyce) that has far-reaching consequences for all involved. Dickens' assault on the flaws of the British judiciary system is based in part on his own experiences as a law clerk. His harsh characterization of the slow, arcane Chancery law process gave voice to widespread frustration with the system, helping to set the stage for its eventual reform in the 1870s.

In Bleak House Dickens experimented with the device of dual narrators: an unnamed third-person narrator and the orphan Esther take turns to tell the story. The style is also remarkable: a hypnotic opening of three paragraphs without a complete sentence. The scope is probably the broadest Dickens ever attempted, ranging from the filthy slums to the landed aristocracy, in a narrative that is in equal parts pathos and comedy. One character, Krook, smells of brimstone and eventually dies of spontaneous human combustion, attributed to his consumption of inordinate quantities of alcohol.

Ironically, Bleak House (the place not the novel) is not, in fact, bleak. The house is owned by one of Dickens's most warm-hearted characters, John Jarndyce and, in general, it represents a place of refuge from the other locales described in the story.

Many critics, including George Gissing and G. K. Chesterton, regard this as Dickens's greatest novel.

As usual, Dickens drew upon many real people and places but was not constrained by the realities. The character Mrs. Jellyby, always involved in good causes but with a chaotic family, is based upon Caroline Chisholm. Many people saw the character of Harold Skimpole as a portrait of Leigh Hunt but this was always denied by Dickens. Mr Jarndyce's friend Mr Boythorn is based on the writer Walter Savage Landor. The novel also includes one of the first detectives to appear in English fiction, Mr Bucket. This character is probably based on Inspector Charles Frederick Field of the recently formed Detective Department at Scotland Yard.[1] Dickens wrote several journalistic pieces about the Inspector and the work of the detectives in his magazine Household Words.

Like most Dickens novels, Bleak House was published in 19 monthly instalments, each containing 32 pages of text and two illustrations by Phiz. Each cost one shilling, except for the last, which was a double issue and cost two.