Blast is the process by which explosives, in a millisecond or less, are converted to hot explosive gases. Depending on the construction of the container holding the explosive, as much as half the force may go into disrupting it rather than producing effects; the strongest cases are military warheads and gravity bombs.

Blast effects are most complex in air, although they are not trivial in air or in solids. Indeed, there is a complex discipline of forming solid structures with explosive waves, perhaps most complex in the compression systems of nuclear weapons.

At the leading edge of the detonation is a sharply delineated reagion called the shock front, in which the pressure rises dramatically. Its initial velocity is much greater than sound but drops dramatically. The gases of detonation follow it.[1] While the emphasis here is on the gases and the shock wave, explosive blast also produces thermal effects, light and sound, with additional and stronger effects from nuclear weapons.[2] The preliminary discussion also assumes the blast takes place near the ground, since, even with high explosives, the Mach effect can cause complex interactions of reinforcement of transmitted and reflected shock waves from bursts above the ground. 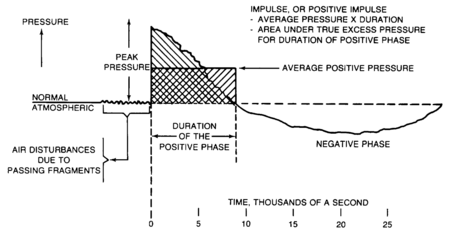 Pressure vs. time in air explosion

The inertia of these gases are prevented, by their inertia, from slowing abruptly at the shock front, but rarefaction still take place, and a low-pressure region may follow behind the leading edge of the gases. Indeed, there may even be a lower-than-atmospheric area further behind, and a vacuum area produces. "When the pressure becomes less than atmospheric, the wind reverses in direction and blows backward toward the point of detonation. Any light object, such as a leaf, when struck by the shock front, is rapidly carried away from the point of detonation and then is blown back almost to the original position when the wind reverses." In especially hot explosions, the heating of the air and its consequence reduction and density becomes important, especially in nuclear explosions. There may even be circumstances, however, where strong structures such as walls are pulled backward by a negative force.

Blast may take place in a porous natural cavity, such as an underground chamber, or in extremely complex manufactured shapes. No shape is more complex than the implosion system of a fission device, in which explosives of different detonation velocities, shaped into complex forms, interact with controlled precise voids, temporary shields, and blast reflectors.

In a nuclear weapon, there may be multiple high explosive detonations to create a shape and then cause actions upon it. The basic shape that will eventually be compressed for fission is a sphere, but that may not be the stored shape. In a linear implosion system, for example, the first explosive system compresses a roughly cylindrical system into a sphere, and the second system then compresses neutron reflectors around it and maximally compresses the sphere.[3]