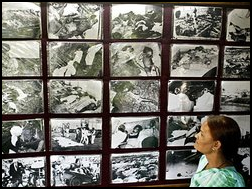 On December 3, 1984, at least 27 tons of methyl isocyanate gas leaked from a pesticide plant in Bhopal, in the state of Madhya Pradesh, India, immediately killing at least 3,800 people and causing significant morbidity and premature death for many thousands more.[1]

The Bhopal plant was owned and operated by Union Carbide India, Limited (UCIL), an Indian company in which the Union Carbide Corporation (UCC) held just over half the stock. The company involved in what became the one of the worst industrial accidents in history immediately tried to disassociate itself from legal responsibility. Eventually it reached a settlement with the Indian Government through mediation of that country's Supreme Court and accepted moral responsibility. It paid $470 million in compensation, a relatively small amount based on significant underestimations of the long-term health consequences of exposure to methyl isocyanate and the number of people exposed.[1]

During the early morning hours of December 3, 1984, methyl isocyanate (MIC), a very toxic gas, leaked from a storage tank in the Union Carbide plant when water was introduced into the storage tank creating a chemical reaction. This reaction generated a substantial increase in the temperature of the liquid inside the tank, building pressure and venting off a large volume of toxic gas. Safety systems, such as a flare stack (for the burning of excess gas), a caustic soda scrubber (for neutralization) and a refrigeration unit for cooling, did not contain the reaction. More than 27 tons of the gas had escaped into the air, spreading approximately eight kilometers downwind, over the city of nearly 900,000 people.[1][2]

Prevailing atmospheric conditions such as an inversion aloft and a low wind speed prevented dispersion of the gas.[3] Eyewitnesses reported that a cloud of gas enveloped the area and moved slowly through a residential neighborhood of Bhopal. The MIC concentration was estimated to be about 27 parts per million (ppm), or about 1,350 times that of the 0.02 ppm set by the U.S. Occupational Safety and Health Administration (OSHA) as their Permissible Exposure Limit (PEL) as well as by the U.S.National Institute for Occupational Safety and Health (NIOSH) as their Recommended Exposure Limit (REL).[1][4][5]

The acute irritant effects of MIC created panic, anxiety, and disorientation, and it caused people to run out of their homes into the gas cloud, the result of which was an increased dosage of the chemical. Variability in human exposure, therefore, was likely to have resulted related to the distance of the residence from the pesticide plant, duration of exposure, and activity during exposure.[1]

Of the more than 200,000 persons exposed to the gas, the death toll one week following the accident exceeded 2,500. In November 1989, the Department of Relief and Rehabilitation, Government of Madhya Pradesh, placed the death toll at 3,598, and by 1994 the toll was estimated at more than 6,000. Some uncertainty exists regarding the number of deaths because a portion of the population left the city after the accident and never returned.

As of 2005, independent agencies estimated that the number of disaster-related deaths was between 15,000 and 20,000. Pulmonary edema was the probable cause of death in most cases, with many deaths resulting from secondary respiratory infections. Chronic inflammatory damage to the eyes and lungs appears to be the main cause of morbidity.[1]

The toxic plume had barely cleared when, on December 7, 1984, the first multi-billion dollar lawsuit was filed by an American attorney in a U.S. court. This was the beginning of years of legal machinations in which the ethical implications of the tragedy and its affect on Bhopal's people were largely ignored. In March 1985, the Indian government enacted the Bhopal Gas Leak Disaster Act as a way of ensuring that claims arising from the accident would be dealt with speedily and equitably. The Act made the government the sole representative of the victims in legal proceedings both within and outside India. Eventually all cases were taken out of the U.S. legal system under the ruling of the presiding American judge and placed entirely under Indian jurisdiction much to the detriment of the injured parties.[1]

In a settlement mediated by the Indian Supreme Court, UCC accepted moral responsibility and agreed to pay $470 million to the Indian government to be distributed to claimants as a full and final settlement. The figure was partly based on the disputed claim that only 3,000 people died and 102,000 suffered permanent disabilities. Upon announcing this settlement, shares of UCC rose $2 per share or 7% in value. Had compensation in Bhopal been paid at the same rate that asbestosis victims were being awarded in U.S. courts by defendants including UCC, which mined asbestos from 1963 to 1985, the liability would have been greater than the $10 billion the company was worth and insured for in 1984. By the end of October 2003, according to the Bhopal Gas Tragedy Relief and Rehabilitation Department, compensation had been awarded to 554,895 people for injuries received and 15,310 survivors of those killed. The average amount to families of the dead was $2,200.[1]

The events in Bhopal revealed that expanding industrialization in developing countries without concurrent evolution in safety regulations could have catastrophic consequences. Union Carbide's plant was built in Madhya Pradesh not to avoid environmental regulations in the United States but to exploit the large and growing Indian pesticide market. However, the manner in which the project was executed suggests the existence of a double standard for multinational corporations operating in developing countries. Enforceable uniform international operating regulations for hazardous industries would have provided a mechanism for significantly improved safety in Bhopal. Even without enforcement, international standards could provide norms for measuring performance of individual companies engaged in hazardous activities such as the manufacture of pesticides and other toxic chemicals.[1]

National governments and international agencies should focus on widely applicable techniques for corporate responsibility and accident prevention as much in the developing world context as in advanced industrial nations. Specifically, prevention should include risk reduction in plant location as well as design and safety legislation.[1]

Local governments clearly cannot allow industrial facilities to be situated within urban areas, regardless of the evolution of land use over time. Industry and government need to bring proper financial support to local communities so that they can provide medical and other necessary services to reduce morbidity, mortality and material loss in the case of industrial accidents.[1]

Public health infrastructure was very weak in Bhopal in 1984. The city had four major hospitals but there was a shortage of physicians and hospital beds. There was also no mass casualty emergency response system in place in the city. Existing public health infrastructure needs to be taken into account when hazardous industries choose sites for manufacturing plants. Future management of industrial development requires that appropriate resources be devoted to advance planning before any disaster occurs. Communities that do not possess infrastructure and technical expertise to respond adequately to such industrial accidents should not be chosen as sites for hazardous industry.[1]