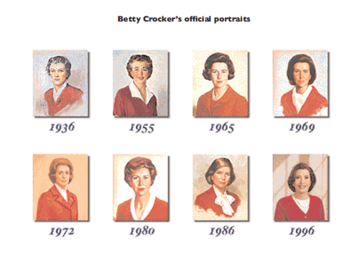 In 1936, New York artist Neysa McMein painted the first portrait of Crocker. Previously a facial drawing was used to depict her. Since the creation of the first portrait, Crocker has had seven additional portraits painted. The last portrait was painted in 1996. Betty is always painted wearing red and white.

Crocker was often featured in radio chats during the 1920s and onward. The Betty Crocker School of the Air counseled listeners how to cook inexpensive meals. Her radio show featured cash-saving cooking tips. Her character was one of the most famous women in America. According to AdAge.com, in 1945 First Lady Eleanor Roosevelt was the best-known woman in the US, immediately followed by Crocker.

By 1954 Crocker had her own television show that often featured celebrities cooking. Guest stars such as Gracie Allen and George Burns learned cooking skills in her television show called The Betty Crocker Search for the All-American Homemaker of Tomorrow. Several different actresses played the part of Betty during the television series, which lasted almost 20 years.

Crocker has her own kitchen, well kitchens, where home economists perform recipe testing. The kitchens were first opened in 1946 and were last updated in 2003. Home economists have 13, 595 square feet of cooking space. Tours of the kitchens were offered until January 1985. It is estimated that 1.5 million visitors stopped by to visit the Betty Crocker Kitchens located in Golden Valley, Minnesota, USA.