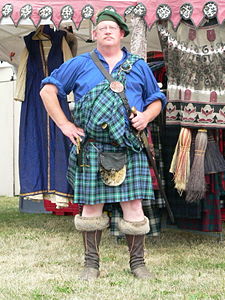 The belted plaid (or, if you prefer, a plaid worn belted) is basically a large blanket-like piece of fabric which is wrapped around one's body, the material being pleated or, more accurately, loosely gathered, and secured at the waist by means of a belt. Typically, a portion of the belted plaid hangs down to about the knees with the rest of the material being wrapped up around one's upper body in a variety of ways and pinned or otherwise secured to keep it in place.

The belted plaid, as we shall refer to it henceforth, was a standard item of men's Highland dress from the late 16th century until the middle of the 18th century. It was also the precursor of the modern tailored kilt. But before discussing the nature and usage of this garment, let us deal with some issues of terminology.

The item of Highland dress which is the subject of this article has been and is often referred to by a variety of different terms, including (in addition to that used in the title of the article) feilidh-mhor, breacan-an-feile, and, very commonly, the Great Kilt.

First, as to the latter term. If one means by "kilt" something like the tailored garment of the modern era, and specifically a tailored garment, then the term "Great Kilt" can be misleading since this garment was untailored. That said, and as long as one does not mean to imply tailoring in the garment, there is nothing wrong with this term other than that it might be confusing to some. The garment was most definitely not known by this name (in any language) during the years of its usage.

Both the terms feilidh-mhor and breacan-an-feile are Gaelic terms, the former meaning roughly "large wrap" and the latter meaning (roughly) "tartan wrap".

The word "plaide" in Gaelic means (roughly) blanket, and that was the original term for the garment in question.

The belted plaid consisted of a piece of tartan fabric approximately 4 or 5 yards in length and about 50 to 60 inches wide. Since the weaving looms in those years wove fabric in 25 - 30 inch widths, the actual item was generally constructed from 8 to 10 yards of such single-width fabric by stitching two 4 or 5 yard pieces together.

It was typically worn as a kind of mantle or cloak cast about one's shoulders. In the latter part of the 16th Century, some in the Highlands of Scotland began putting a belt around their waist on the outside of the plaid, after first pleating or gathering the fabric.

The first clear reference to the belted plaid occurs in the year 1594. In that year, a group of Highlanders from the Western Isles went to Ireland to fight under Red Hugh O'Donnell. Writing about them, Lughaidh noted how they could be distinguished from the Irish soldiers:

They were recognized among the Irish soldiers by the distinction of their arms and clothing . . . for their exterior dress was mottled cloaks of many colors. . ., their belts were over their loins outside their cloaks.

The belted plaid was used not only as a garment, but also for bedding at night, the wearer wrapping himself in it and sleeping directly on the ground.

It was made from wool or a wool/linen combination and woven in a pattern of colored stripes which today has become known as tartan, though originally the word tartan referred to the type of cloth (like linen, or cotton) and not the pattern of colors as the word almost exclusively signifies today.

These patterns were apparently chosen based on a sense of fashion or the availability and expense of natural dyes in the area of manufacture. The modern notion of "clan tartans" whereby each clan or name is associated with a particular design did not exist at that time, but instead dates back to the early 19th Century. Thus if one desires to wear the belted plaid at Highland Games, it would not be inappropriate (much less incorrect) to wear any tartan pattern of one's choosing or invention. In fact, not all such garments were woven in strict accord with the modern definition of tartan pattern (repeating and reversing, symmetric in both warp and weft).

The Kilt at Highland Games Today 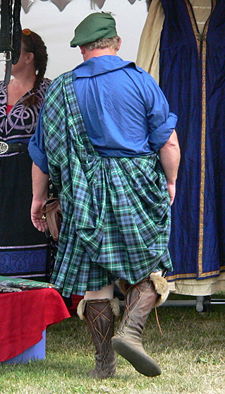 Belted plaid, view from the rear. Note how the garment hangs about the wearer's body.

At nearly every Highland Games gathering today, there are vendors who merchant tartan items, whether tailored kilts, blankets, scarves, ties, or tartan fabric. By far the greatest proportion of their sales, in the category of Highland dress, are related to "modern" Highland attire, especially the modern tailored kilt and accessories for it.

This is somewhat ironic in that the present-day Highland Games, at which the modern tailored kilt is ubiquitous, can trace their origins back to the early 19th Century interest in matters related to Highland culture. (Note: this statement should not be construed to mean that the Highland Games themselves do not have antecedents going much further back in history.) This interest manifested itself in various reconstructionist events purportedly designed as a celebration of that earlier Gaelic Highland and Celtic culture and such cultures never wore garments like the modern tailored kilt!

Instead, during the years preceding Cullloden, to the extent that the Highland people wore any kind of kilt-like garment, it was the belted plaid and not the modern tailored kilt! And yet today, at Highland gatherings, one seldom sees the belted plaid, and even knowledge about this garment is not as widespread as it should be.

The origins of the modern short kilt (or feilidh-beag, meaning little wrap, and often Anglicized to philabeg with various spellings) are still much in debate. What is clear is that the philabeg originated from the belted plaid sometime in the early 18th Century, or perhaps somewhat earlier, depending on which side of the debate you are on. It (the philabeg) consisted essentially of the lower half only of a plaide, gathered or pleated and held around the waist with a belt. Later, the gatherings were stitched down to facilitate holding them in place and thus originated the modern tailored kilt.