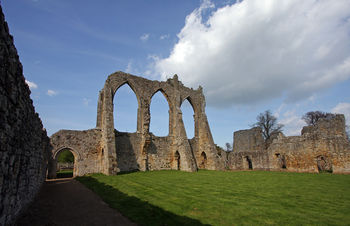 Bayham Abbey was founded in the early 13th century by Sir Robert de Turnham in the town of Bayham in Sussex near the county's border with Kent. It was dissolved in 1525 and the buildings allowed to become ruinous. In the early 18th century a dower house was built nearby and the remains of the former abbey were turned into a landscape feature. Today the site is managed by English Heritage and open to the public.

The Premonstratensian community (an order founded in Prémontré in France) at Bayham was created in around 1208 through the amalgamation of two other monastic communities, one at Otham Abbey and the other at Brockley Abbey. The first abbot was Jordan, and had previously been the abbot of Otham.[1] With the monastic community moved to Bayham, Otham became a grange, meaning it was used as farmland; it had been founded less than thirty years earlier.[2]

Building work began in around 1207 and the structure was intended to accommodate around 18 canons.[3] Bayham Abbey held lands in Sussex and other counties which were valued at £72, with property in Sussex making up just over half that figure. A legal dispute in 1279 resulted in the excommunication of the abbey. The abbot at the time, Richard, asserted that the church at Hailsham came under his authority rather than that of Michelham Prioy who controlled it at the time. The Bishop of Chichester decided Richard was in the wrong and excommunicated Bayham Abbey. In January the next year Bayham's abbots who had established themselves in Hailsham church were forcibly evicted. Custody of the church changed hands several times over the coming years as the dispute remained unsettled. Eventually Michelham Priory renounced their claim on the church in 1287 on condition that the abbey would pay the priory £16 each year.[1] 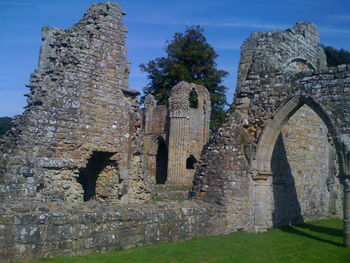 (CC [2]) Photo: Francis Storr
The ruins of Bayham Abbey are curated by English Heritage and are open to the public.

Cardinal Wolsey dissolved Bayham Abbey in 1525 after which the buildings fell into a state of disrepair. In the early 19th century a dower house was built for the Viscount of Bayham, John Pratt. The house is situated west of the abbey's ruins which became a landscape feature in a new array of gardens designed by Humphrey Repton.[4][5]

The remains of the abbey were the subject of archaeological investigation in the 20th century, with excavations in 1965, 1973–1976, and 1985–1986. Only a short note was published on the excavations and the rest of the information is kept in archives.[6] Today the site is a scheduled monument, and since 1970 and the ruins of the buildings have been open to the public. English Heritage curate the site and also publish the guidebook (first in 1985 and a revised edition in 2009).[3][4][7]

The site of Bayham Abbey is bounded by a moat in the north, east, and south, with an earthen bank and a ditch marking the abbey's boundary to the west. The grounds also include at least two medieval fishponds which would have acted as a food source for the monastic community.[3][8] Archaeological excavations have demonstrated that while Bayham Abbey's buildings were mainly constructed in the early 13th century, though a gatehouse was added in the 14th century, with small additions to the abbey in the 15th century. The abbey was a complex of several building including a church and dormitory, parts of which remain standing today.[3]