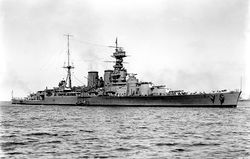 In naval warfare, especially the period of the First World War, a battlecruiser was a major warship intended to be able to escape any ship that was a threat to it, but to have the speed to catch and destroy any ship vulnerable to its weapons. In other words, in comparison to a battleship of the time, it had greater speed, comparable guns, but less protection. A particular difference was that the battlecruiser was not armored against guns of the power of its main battery, while, under defined circumstances, a battleship's armor could protect it.

The concept, although implemented by several countries, is most associated with the Royal Navy, where Admiral "Jacky" Fisher, was its champion. [1]

While battlecruisers did carry out some effective raids, their powerful guns tempted naval commanders to use them as part of the main battle force, along with battleships. This proved disastrous, especially to the British, at the Battle of Jutland, for two reasons: battlecruisers did not, in general, have the protection to exchange fire with battleships; the specific British battleships were inferior to their German counterpart in protecting their ammunition,[2] and HMS Indefatigable and HMS Queen Mary exploded under battlecruiser fire. HMS Invincible also exploded and sank.

The Japanese Kongo-class battleships had originally been constructed as battlecruisers, but were remodeled into full fast battleships before the outbreak of WWII.

British battlecruisers did not do well at the start of the war. HMS Hood exploded and sank, with 3 survivors, when fighting the battleship DKM Bismarck.[3] Force Z, consisting of the battleship HMS Prince of Wales and the battlecruiser HMS Repulse was sunk by Japanese land-based aircraft in December 1941; they had no air cover.

The last operational battlecruisers were the German DKM Scharnhorst and DKM Gneisenau, both of which were effective commerce raiders. They escaped from dangerous French waters in the Channel Dash of 1942, although Gneisenau struck a mine and later took major damage, in port, from bombing. Scharnhorst sank in the Battle of North Cape, fighting the Royal Navy battleship HMS Duke of York) , on 26 December 1943. After her sinking, Germany abandoned efforts to upgrade the Gneisenau, and instead scuttled her in 1945. 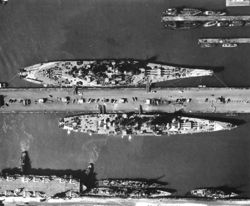 (PD) Photo: United States Navy
The battleship USS Missouri (BB-63) (the largest ship) and the "large cruiser" USS Alaska (CB-1) (on the other side of the pier) are tied up at Norfolk Naval Base, Virginia circa August 1944.[4]

In later designs, a distinction was seen between "fast battleships" such as the U.S. Iowa-class and more heavily-armed but slower battleships such as the Japanese Yamato-class. There were also designs for "large cruisers" whose size, armor, and armament placed the between a heavy cruiser and a battleship, but without a definitive mission few were built. Occasionally, the term battlecruiser has been applied to the large cruisers of the Russian Kirov-class, but it is a great stretch to apply the definition to ships armed with large anti-shipping missiles as their main battery, without heavy armor.