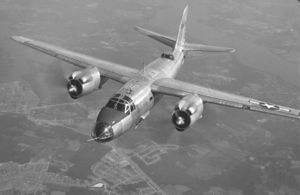 First flown in 1940, the B-26 Marauder was one of the two major U.S. Army Air Force medium bombers of the Second World War. It operated in all theaters, but principally in the Europe and Mediterranean. It commonly bombed from 10-15,000 feet, as opposed to the B-25 Mitchell, which was the predominant medium bomber in the Southwest Pacific and was known as a low-level aircraft. Approximately 5,000 were built.

While it was eventually to have an extremely low loss rate, the early versions were hard for inexperienced pilots to fly, sometimes called the "Widow-Maker". Early models had an unusually small wing area in proportion to the craft's weight (i.e., high wing loading). This gave the plane high speed but required long takeoff runs and careful technique in both takeoff and landing. This led the B-26 to be called "The Flying Prostitute", "The Baltimore Whore", "The Flying Vagrant", or "The Wingless Wonder" because pilots said it had "no visible means of support."

BG James Doolittle, who was to command a B-26 wing in North Africa after the Doolittle Raid, was given responsibility for solving the problem. Engineering improvements, as well as better training, solved the problem. Doolittle personally demonstrated that he could fly the aircraft even after shutting one of its two engines immediately after takeoff.

An extensively remanufactured "K" model was developed for the Air Force and Central Intelligence Agency, and used in various third world applications in the 1960s, notably in Africa and Southeast Asia. B-26 aircraft conducted a near-perfect raid before the Bay of Pigs, but missed enough Cuban aircraft to doom the invasion.