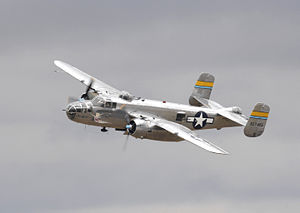 A U.S. Army Air Force medium bomber of the Second World War, the B-25 Mitchell was used in all theaters of operation, but gained special fame for its one-way mission and seemingly impossible carrier takeoff for the Doolittle Raid of 1942, the first direct offensive action against Japan. The greatest number of combat versions were in the Southwest Pacific. Approximately 10,000 were built.

It was continuously upgraded through the war. The B-25A, the first version to fly in combat went into service in August 1941. It was considered undergunned, with a .30 caliber machine gun in the nose, one on top of the fuselage, one that could be moved from side to side, and a .50 caliber in the tail. Increasing gunpower was one of the trademarks of B-25 development. The C model, based on early combat experience, went to all .50 caliber M2 machine guns. D, E, and F models were either made in a different factory or were single-ship test runs. 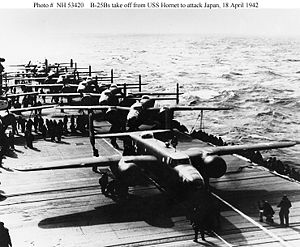 B-25 bombers awaiting takeoff on the raid

Only the B-25 and B-26 Marauder medium bombers, still in early versions, could have been used in the operation; the B-25 had superior short-term takeoff characteristics that led to its choice. This used a B model, modified for the mission to increase takeoff performance and range, the only case where guns were removed.

Among the continuing adaptations of the B-25 were variants for low-level attack against Japanese ships, using both the technique of skip bombing, and constantly increasing gun power. The G model replaced the nose .50 caliber machine gun with a 75mm howitzer, an immensely powerful gun for an aircraft. [1] It was retained in the H model, with the tail turret now powered and with twin guns.

In the refined J version, the 75mm cannon was removed, but with both factory and field modifications, up to fourteen .50 caliber M2 machine guns were rigged such that they could fire forward. Do not think of these machine guns as a light infantry weapons, massive .50 caliber fire could severely damage a destroyer.

After the end of the war 1945, the B-25 Mitchell outnumbered all other medium bombers in service with the USAAF. Their primary military use was as an advanced trainer for multi-engine pilots and for radar, and remained in service until January 1959.[2] A number were used as executive transports, both in the military and in civilian use.