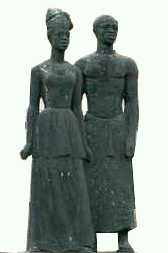 Amo was born around 1703 in a village named Nkubeam near the town of Axim (today Ghana). In 1707, he was enslaved and sent to Europe by the Dutch East India Company. In the same year, he was given as a present to Anthony Ulrich, Duke of Brunswick-Wolfenbüttel.

Amo was baptised in 1708 and received the German Christian names “Anton Wilhelm”. The Duke realised Amo’s outstanding intelligence and sent to the University of Halle in 1727. It is uncertain, if Amo had visited the University of Helmstedt before, as many authors claim.

Amo fell in love with a lecturer’s cousin, Anna Dorothea Gnüge. Later, Anna married the prospective pastor Lange. This couple caused a lot of problems for Amo. In 1746, they published a satirical poem about a “hairy, smart-alecky goatface” trying to kiss a girl. It was obvious for everyone that their mockery aimed at Amo. They also publish an article in “Wöchentliche Hallische Anzeigen” from October 1747 describing “Mr. Amo, an erudite moor, courting a beautiful brunette”.

It is unknown, when Amo left Europe. In 1753, David henrij Gallandat, a ship’s doctor reported to have met the philosopher near Axim. This is the last mention of him.

(this section is from the German Wikipedia)

Translations and Abstracts of his works

(this section is from the English Wikipedia)