Andromeda is a constellation in the northern sky. It is surrounded by Perseus, Cassiopeia, Lacerta, Pegasus, Pisces and Triangulum. 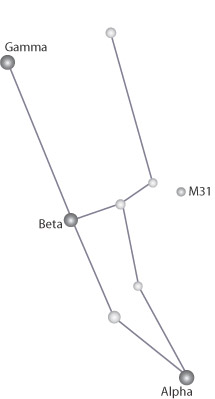 The brightest stars in Andromeda are α Andromedae (Alpheratz) and β Andromedae (Mirach), both of which are of apparent magnitude 2.06. The star γ And is also known as Almach.[2]

Groombridge 34 is one of the nearest double star systems known and consists of two red dwarf stars located 11.6 light years from Earth.

Andromeda also contains a number of deep-sky objects of which perhaps the best known is the Andromeda Galaxy, also known as M 31 and NGC 224, and its satellite galaxies NGC 221 (M 32) and NGC 205 (M 110). The open cluster NGC 752 is conspicuous in small optical instruments.

According to legend, Andromeda was a daughter of an Ethiopian king named Cepheus. She was forged to a rock to be eaten by Cetus as a punishment of her mother Cassiopeia, who had insulted the Gods by telling everybody that her daughter was more beautiful than the nymphs, the daughters of Nereus.