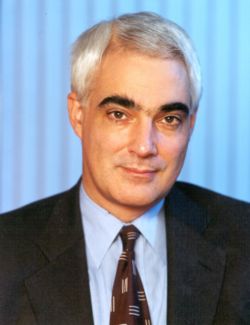 Alistair Darling is a British Member of Parliament who served for 22 years in senior posts in opposition and in government between 1988 to 2010. In 2007 he succeeded Gordon Brown as Chancellor of the Exchequer. Shortly after he took office, the country experienced the first effects of the Great Recession and, in the following three years he was engaged in the fiscal management of the British economy during its most turbulent post-war period. After a brief spell as an opposition spokesman following his party's defeat in 2010, he retired from front-line politics but continued to serve as an active Member of Parliament. From 2012, he led the Better Together campaign against Scottish independence.

Chancellor of the Exchequer

The economic developments during Alistair Darling's chancellorship are described in the article on the Great Recession, and their effects upon the Government's finances are summarised in the addendum to this article

When Alastair Darling took over as Chancellor of the Exchequer in June 2007, some banks were beginning to suffer the effects of the subprime mortgage crisis, but the economy was continuing to grow at an above-trend rate. Later in that year, however, commodity price increases were beginning to affect growth, and the banking crisis was getting worse. In his November pre-budget report, Alistair Darling warned that a continuation of the banking crisis could reduce the rate of further growth[2]. The news of the major Bear Stearns bank failure in March 2008, marked an increase in the severity of the financial crisis, and prompted him to refer to the economic situation as "arguably the worst in 60 years"[3] (see box). The headline writer's interpretation of his words were "Economy at 60-year low, says Darling", - and that interpretation was used by the Shadow Chancellor to describe it as an admission of failure of economic management, and a contradiction of reassuring statements by Gordon Brown[4]. Other commentators treated it as a needlessly alarming exaggeration[5].

In the October 2008, there was a major intensification of the financial crisis, triggered by the previous month's collapse of the United States Lehman Brothers investment bank. Alistair Darling and Gordon Brown responded with a rescue package for British banks [6], and an international campaign[7][8] to persuade other governments to adopt similar measures in support their banks. During the following months, the British example was followed by other European countries [9] and similar measures were adopted by the United States. Those actions were followed by stabilisation of the financial system, but many British banks continued to suffer serious financial difficulties. A programme of additional support for the banks was adopted and by April 2009, five of the nine largest British banks had been taken partly or wholly into public ownership - in addition to the 2007 nationalisation of Northern Rock.

In November 2008, Alistair Darling announced a fiscal stimulus amounting to 1.5 per cent of GDP, including a temporary 2½ percentage points reduction in value-added tax and a bringing forward of £3 billion of capital investment[10]. His announcement had a mixed reception: it was called deceitful by the Shadow Chancellor[11] and "crass" by the German Finance Minister[12], but was subsequently described as successful by the International Monetary Fund[13]. There were responses to criticisms of the tax reduction by the Institute for Fiscal Studies [14] and the Centre for Economics and Business Research [15]

The growth of output resumed in the 4th quarter of 2009, and attention turned to the problem of reducing the, by then inflated budget deficit. Alistair Darling had inherited from Gordon Brown a deficit of 2.7 per cent of national income (which was above the OECD average, but lower than the deficit that Gordon Brown had inherited from his predecessor[16]), and, by the end of 2009, the deficit had grown to nearly 12 per cent. Of the growth in the deficit, less than 2 per cent was the result of Alistair Darling's fiscal policy actions: the remainder of the increase being due the recessionary operation of the economy's automatic stabilisers. The Institute for Fiscal Studies estimates the structural deficit - which is the portion of the deficit that is expected to persist after recessionary influences have ceased - to be about 6 per cent of national income. Recognising that the continuation of that magnitude of deficit would be unsustainable, the government launched the Fiscal Responsibility Act[17] - imposing upon itself a commitment to reduce it by half by the financial year ending 2014, and to make continuing reductions thereafter.

Following the 2010 election, Alistair Darling served as the opposition's Shadow Chancellor until October 2010, when he retired from the Shadow Cabinet.

In 2012, Darling launched the official Better Together cross-party campaign to keep Scotland within the United Kingdom, ahead of a referendum on independence scheduled for September 2014.[18]

The eldest of four children, Alistair Darling was born to a middle class Scottish family with Conservative party traditions. He attended a variety of primary schools as the family moved from place to place following his fathers civil engineering jobs, after which he was sent to a well-known Scottish boarding school. From there he went to Aberdeen University to study law.

He was briefly engaged in Marxist politics (see box) and he continued to express left-wing views after joining the Labour party in 1977. While practising as a solicitor, he was elected in 1982 to the local council for the Lothian region of Scotland. He must be assumed to have revised his political views in the course of the next ten years, having by 1992, become a strong supporter of the social democratic New Labour movement within the Parliamentary Labour party.

As one of the longest-serving New Labour heads of departments Alistair Darling acquired a reputation as a "safe pair of hands" (described by journalist Andrew Rawnsley as "the type of managerial technocrat increasingly preferred by Blair"[20]). A cartoonist in a mass-circulation newspaper depicted him as Gordon Brown's puppet[21], but his disagreement with Gordon Brown in 2008 (over his "worst in 60 years" remark) gave a different impression. Gordon Brown is reported to have asked for its retraction because it could make matters worse, but Alistair Darling took the view that it was better to be frank with the public.

Alistair Darling has a personality and an outlook on life that might be considered unusual in a politician. He is a very private person. He doesn't like being photographed and he is reluctant to give interviews. "For most of my political life," he told one interviewer, "I've kept out of doing this kind of interview. You have to be quite careful - unless you're one of those people who's happy to give everything of themselves. And I, for one, am not."[3]. He does not enjoy public speaking, and recognises that as a limitation in a politician (see box). Interviewers have seen in him a personality that differs from his public persona. "Warmer and funnier", one of them found him, and with humour that is "deadpan and bone dry"[22] .