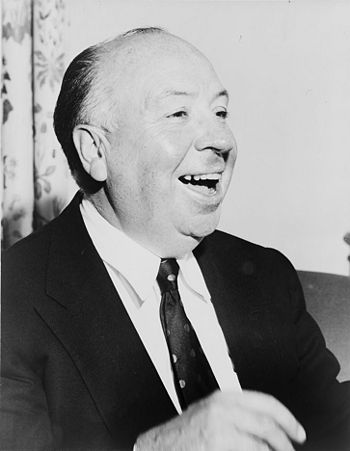 Sir Alfred Joseph Hitchcock (13th August 1899 - 29th April 1980) was an English-born film director who achieved great success in Hollywood, creating some of the most celebrated thrillers of his day, which earned him the popular title of the "master of suspense". His films, typically cast with Hollywood's biggest stars, were technically advanced and often emotionally powerful, and were designed as crowd-pleasing entertainment for general adult audiences. Late in his long career he created what may be his most famous cinematic moment, the shocking murder of a woman in a shower in Psycho (1960). Describing his own style, he once famously remarked, "Drama is life with the dull bits left out." Nominated five times for an Academy Award for Best Director, he was one of the most celebrated film directors never to win the prize.[1] A portly fellow with a striking profile and deep droll voice, he also achieved the unprecedented status of being the most well-recognized film director in cinema history, having played cameo roles in virtually all of his films.