Aesthetics is a discipline of philosophy which deals with understanding aesthetic evaluation and judgment through the application of reason. Aesthetics does not make judgments about the quality of works of art, but rather tries to apply reason to judgments others make about art. Aesthetic philosophers will tend to be interested in questions such as "what criteria do people use to discern art from non-art and are they reasonable?" and "what is it which we are talking about when we talk about expressivity in art?" 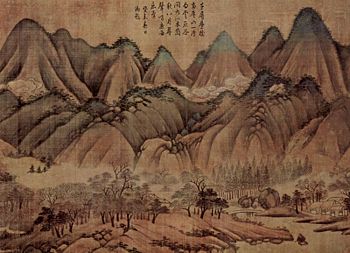 A typical chinese pastoral scene. The Chinese developed a detailed system of aesthetically defined components for composing such images.

The term ‘aesthetic’ is derived from the Greek word for perception, and originally applied to things that are perceived by the senses as opposed to being objects of thought. The narrower and more recent meaning of the term in the philosophy of art is that it involves the criticismof taste and the appreciation of the beautiful. And beauty was linked by the ancient Greeks to goodness. The phrase kalos kai agathos (beautiful and good) was the standard description of the Homeric heroes. Plato also linked beauty to truth, generating the historic philosophical trilogy: truth, beauty and goodness. But what is beauty’s relation to truth and virtue? Many, from Socrates' own supposed muse, Diotima, onwards, have suggested that beauty has its own value, independent of morality or truth, others that it offers a unique path to higher truths and morality. But is it only what is beautiful that can do this, and not what is merely ordinary or even ugly?

In his Enquiry Concerning Beauty, Order, Harmony, Design (1725), Frances Hutcheson (1694-1746) argued that recognising an object as beautiful was a matter of distinguishing its special aesthetic qualities from factual or empirical ones. The beauty of an object was essentially a matter of its capacity to affect an observer in some particular way. But different kinds of arts (genres) produce different responses: comedy from tragedy, exotic art from music, and so on. That suggests that a person’s emotional or aesthetic response will depend not only on the object itself, but on what aspect of it the observer is looking at or focussing on. But Arthur Schopenhauer argued that there was such a distinctive experience since viewing a beautiful object requires ‘distancing’ ourselves – that is, forgetting our will and our individuality. We lose ourselves in pure contemplation, becoming a mirror of the object contemplated; or indeed even identical with it. Like, Plato, Schopenhauer believed that in art we see the universal in the particular: ‘In such contemplation the particular thing becomes at once the Idea of its species, and the perceiving individual becomes pure subject of knowledge.’

Immanuel Kant discussed beauty and taste in his influential Critique of Judgement (1790), saying there that beauty depends on appearance and within that on form and design. In visual art, he said, it is not the colours but the pattern that the colours make; in music, the relation between the sounds, not timbre or pitch that matter. The English art critic John Ruskin (1819-1900) distinguished aesthesis – a kind of ‘animal consciousness of the pleasantness’ of the object - from theoria - the sense that beauty has a spiritual core.

Such accounts of art were influential in the nineteenth century, but the twentieth brought a greater concern with matter over form and a challenge to the idea of art and beauty as moral concepts. For what kind of judgement is it to say that something is beautiful? Is it like having a taste for apple pie, or disliking witnessing cruelty or violence - or is it a judgement of a completely different kind altogether? That a judgement of this sort has a special character is suggested by the fact that the special name ‘aesthetic judgement’ is reserved for it.

That is to say, they are not just an expression of personal likes or dislikes; it is reasonable to expect that other people will agree with them. David Hume saw judgements of beauty in a way not so different from this, arising from sentiment, but still deserving, on the whole, of universal acceptance. In Of the Standard of Taste (1757) Hume wrote: ‘It appears then, that, amidst all the variety and caprice of taste, there are certain general principles of approbation or blame, whose influence a careful eye may trace in all operations of the mind.’

‘To feel beauty is a better thing than to understand how we come to feel it.’

‘ . . . each thing has its own characteristic beauty, not only everything organic which expresses itself in the unity on an individual being, but also everything inorganic and formless, and even every manufactured article.’

Schopenhauer, The World as Will and Idea

Traditionally, aesthetics and ethics have been tied together - in the common 'triple' phrasing of truth, justice and beauty. Plato, in books two and three The Republic, proposed banning poetry and drama from his envisioned city - or at least keeping them under a strict censorial leash, lest they shape the upbringing of the Guardians and Auxiliaries in a way that would not lead to the good of the city. Republic provides a three-fold criteria for good art or art that would not be censored in the Republic: the truth of the ideas contained in the art, it's ethical worth and whether or not it is psychologically beneficial to the viewer. One can reduce the truth and psychology to ethical benefit: for one might say that art that is not psychologically beneficial is immoral, as is art that spreads falsehoods. Similarly to Plato, Immanuel Kant considers good art to be morally good, as did Friedrich Schiller. Many modern thinkers disagree - Monroe Beardsley being a prime example.

Plato's view of art as being purely imitation of nature does not cover more modern and non-representative art, such as that of, say, Jackson Pollock or Henri Matisse.

A large part of an early version of this article was taken from the entry on Aesthetics by Brenda Almond, in 'Essentials of Philosophy and Ethics', edited by Martin Cohen, (Hodder Arnold 2006) and donated to the Citizendium by the authors.