Various adsorbent chemistries in chromatography are chosen based on the properties of the molecule or protein of interest and its ability to interact with a stationary phase. Biomolecules and proteins in particular can adsorb to a range of solid phases in a selective manner that allows for differential elution and purification. Adsorbents that have been successfully used in the purification of biomolecules include hydrophobic adsorbents, ion exchangers and affinity adsorbents. 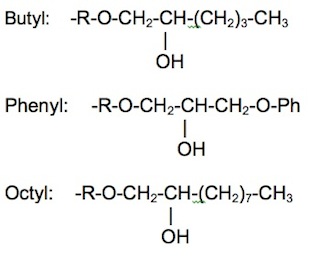 Hydrophobic interaction chromatography can be used to separate proteins and peptides according to their hydrophobicity. The procedure is suited as an intermediate step in a multi-step purification process and is an ideal step after ion exchange chromatography. For example, glycoproteins with high carbon content, that often bind irreversibly to saccharide-based chromatographic media, can be purified by HIC resins. HIC can be used as an intermediate purification step to separate the correctly folded form of a growth factor, such as IGF-1, from a misfolded, yet stable form. HIC has also been shown to be successful in purifying DNA plasmids. The Toyopearl Hexyl-650C resin is effective in removing endotoxins with capacities exceeding 2 million EU/mL of resin, while effectively eliminating RNA and protein contaminants. Additionally, it is effective in separating the supercoiled and open circular forms of plasmid DNA.

Reversed phase chromatography (RPC) separates molecules on the basis of hydrophobicity. It is closely related to HIC in that both techniques are based on interactions between hydrophobic patches on biomolecule surfaces and the hydrophobic surfaces of a chromatographic medium. However, RPC differs in practice in that the surface of an RPC medium is generally highly substituted with hydrocarbon chains and, thus, more hydrophobic than that of an HIC medium, leading to stronger interactions that must be reversed using non-polar, organic solvents for successful elution. RPC is useful in applications like peptide mapping or purity checking. It is often used in the final polishing step of oligonucleotide or peptide purification. 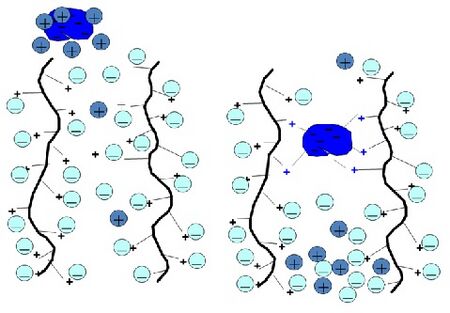 © Image: Jean B. Hunter
Figure 3. Illustration of an anion exchanger, consisting of a positively-charged resin, that binds to a compound with an overall negative charge. The counter ions, initially in equilibrium with the ion exchanger, are exchanged for the sample compound.

Ion exchange chromatography is a process that separates molecules according to their net charge. A column that is packed with an insoluble solid phase containing ionic groups can reversibly exchange ions with a solution. Biomolecules attach to ion exchangers through electrostatic interactions between the molecule's surface charge and the charged groups on the ion exchanger. Some molecules may have both anionic and cationic groups. An anion exchanger, which consists of a positively-charged resin, will bind a compound with an overall negative charge. Likewise, a cation exchanger, which consists of a negatively-charged resin, will bind a compound with an overall positive charge. The strength of adsorption is proportional to the net charge of the molecule. A suitable resin is chosen based on the charge and molecular weight of the target molecule or protein. 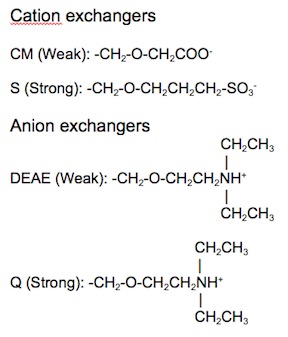 There are two methods of desorbing molecules from the ion exchanger:

Neutral salts such as sodium chloride are often used as the desorbing agent because they have little effect on the running pH.

Affinity chromatography is a method of separating mixtures based on highly specific biological interactions, making use of a specific natural or added property in the molecule of interest to isolate it from other molecules in the sample. Examples of such interactions can be found in enzymes and substrates or receptors and ligands. An affinity ligand specific for the binding site of the target molecule is coupled to a stationary phase, typically a gel matrix composed of agarose or cross-linked agarose beads. During purification, the specific ligand on the matrix will bind molecules according to its specificity only. The other molecules, which do not possess the defined property, move freely through the column unbound. The bound molecules are subsequently released and eluted via the addition of a competing substance or by changing the conditions in the column towards dissociation.

The adsorbents used consist of a matrix to which a ligand with high affinity for the molecules to be separated is reacted with the activated matrix or with a spacer arm attached to the matrix. Agarose beads and cross-linked agarose beads are typical solid packing used as matrices in affinity chromatography. The main requirements for a successful affinity adsorbent are as follows:

Immobilized metal affinity chromatography (IMAC) is a commonly used technique in protein purification. IMAC is distinct from other affinity techniques in that it can be used on native proteins without the need for specialized affinity tags to facilitate binding. Instead, IMAC relies on the interaction of specific surface amino acids of the target protein and chelated metal ions. Proteins with an affinity for metal ions are retained in the column containing immobilized metal ions, such as cobalt and nickel for the purification of histidine containing proteins. This allows small differences in protein sequence and structure to be discerned, which is particularly important when a protein of interest is to be separated from a complex mixture. Since many proteins do not naturally have an affinity for metal ions, recombinant DNA technology can be used to insert a protein tag into the relevant gene. To elute the protein of interest, methods such as changing the pH or adding a competing molecule are used.

Size exclusion chromatography is a process that separates molecules according to their size. This can be done using resins or membranes. With membranes, the smaller molecules pass through the membrane while larger molecules are held back. Using resins, the larger molecules pass through the column while smaller molecules, which are trapped in the pores of the resin, take longer to flow through. There is no binding between the solid phase and solute molecules. The solid phase is composed of a gel with calibrated pores; the solids separate by diffusing in and out of these pores. 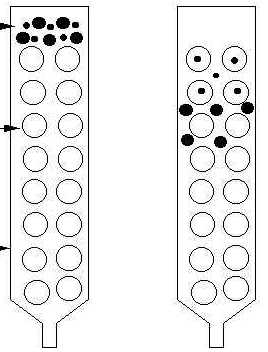 The following steps are performed during the operation of size exclusion chromatography:

Size exclusion chromatography is a popular method of characterizing biological polymers, such as proteins and nucleic acids, because it is able to provide good molecular weight results for polymers; it can be used to determine the subunits that compose a multimeric protein and to isolate multimers from each other. SEC can also be used to remove small contaminants from protein mixtures and is commonly used as a polishing step in protein purification. For low pressure operation, a gel medium such as polyacrylamide, dextran or agarose is typically used, while silica or cross-linked polystyrene medium is used for high pressure operation. SEC is not a high resolution technique and cannot be used to separate components unless they differ by at least two-fold in molecular weight.