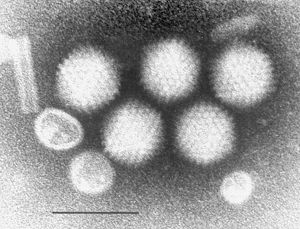 Adenoviruses are nonenveloped and icosahedral (contain 20 faces) viruses. In 1953, they were first isolated from human tonsils during tonsillectomy. Therefore, their name comes from adenoids, which means tonsils, because they were first isolated from human tonsils. They have the ability to infect various animals, including humans, canines and birds. In humans, adenoviruses are mostly known for their capability of causing respiratory diseases. Therefore, they are one of the viruses which cause the common cold. Furthermore, some have been shown to cause cancer in rodents - although this was not shown to occur for humans.

Adenoviruses are able to withstand extreme conditions, including unfavorable pH environments. They are resistant to acidic pH's of 5-6. Furthermore, they can withstand the harshness of lipid solvents. Therefore, they can live outside of a host for long periods of time compared to other viruses.

The genome of adenoviridae consists of around 30-38 Kbp. It is linear and is made up of double stranded DNA, with no segmentation. Theoretically, the genome can carry 30-40 genes on it. The ending sequences of the viruses strand are repeats which are inverted. Therefore, [panhandle] structures can be made from denatured DNA.

The terminal end of the genome consists of a 55 kDa protein on every 5' end of it. The importance of this is that it enables sufficient replication of that part of the DNA. Furthermore, they can be used as primers.

Compared to other viral genomes, the genome of adenoviruses is considered larger. However, in reality the genome is actually quite simple and is very reliant on the host cell for various tasks, including replication. 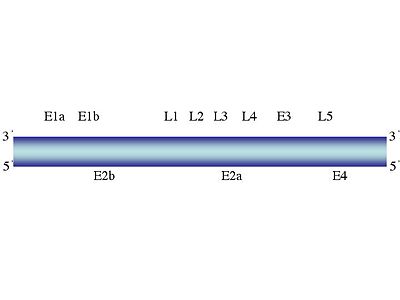 The structure of an adenovirus is usually 90-100 nm in diameter. The whole virus is made up of a core, which is where the dsDNA is found. This core is made up of a nucleoprotein complex. The fibers of the virus are found external to the capsid. The length of the fibers are around 9-77.5 nm and some contain glycoproteins. Moreover, they aid in the process of clinging to the host cell and triggering the endocytotic process by which the host cell takes in the virus.

The surface of the capsid is made up of 252 capsomers. Twelve of the capsomers pentons and the other 240 are hexons. Pentons are responsible for the rupturing of the membrane of the host cell and release of the particle into the host cell, enabling phagocytosis. Hexons are responsible for the structure of the virus. The core of the virus is currently thought the have the function of packaging the DNA.

Like all viruses, adenoviruses require a host to reproduce. However, they are unique in the sense that they are capable of being outside of their host for longer periods of time because they are resistant to various harsh conditions. They spread from host to host by methods of either direct contact, waterborne transmission, or fecal-oral transmission.

Normally, adenovirus disease more commonly occur during the late winter, spring and the beginning of summer. Furthermore, they cause disease on a wide variety of species in different ecological environments.

Adenoviruses have two phases which allow them to cause disease. First - in the early phase - the virus attaches to the host cell using its fibers. This causes the host cell to take in the adenovirus through endocytosis. As the virus makes its way to the nucleus, the virus disassembles to allow the DNA to be released. Transcription on the viral DNA begins when it is in the nucleus. Initially, the proteins that are produced are used to regulate the translation and transcription of the viral genome. They activate different genes of the virus. Moreover, they allow the virus to survive the immune system of the host.

The late phase is started as assembly proteins are made. Genes are made to assemble new viruses. At the same time, translation of the hosts mRNA is stopped by blocking the movement of host mRNA - while the mRNA of the virus is allowed to freely move across the nucleus and into the cytoplasm to be translated. As more and more viruses are made, the host cell dies and releases them.

Modern research is attempting to treat cancer by using adenovirus vectors. Much study is done on oncogenes and how to stop the rapid replication that they cause. Some genes which are responsible for the viral reproduction are being removed in hopes of removing tumor cells. This is done through attenuating the vectors of adenovirus and is discussed further in the "Current Research" section.

Attenuated adenovirus vector are being tested to see whether they can be a method of curing or diagnosing cancer. The activation of telomerase is a significant step in carcinogenesis. Its activation is related to human telomerase reverse transcriptase (hTERT). By attenuating adenovirus 5 vector, they made the hTERT express two proteins - E1A and E1B. Thus, "Telomelysin replicated efficiently and induced marked cell killing in a panel of human cancer cell lines, whereas replication as well as cytotoxicity was highly attenuated in normal human cells lacking telomerase activity." Furthermore, they added Green Fluorescent Protein to the vector, and showed that "TelomeScan causes viral spread into the regional lymphatic area and selectively replicates in neoplastic lesions, resulting in GFP expression in metastatic lymph nodes."[1]

Vaccine treatments were made from the usage of recombinant adenovirus vectors. This showed that “regimen with three immunizations incorporating MVA, human adenovirus serotype 5 and chimpanzee-derived adenoviruses serotype 68 or 7 yields high transgene product-specific CD8+ T cell frequencies in spleen, blood, lymph nodes, and peritoneal lavage.” Also, the usefulness of active T cells increased from multiple dose vaccines, which can be “important in protection against pathogens such as HIV-1”.[2]