Under a variety of designations including Q-2, AQM-34, and BQM-34, the Ryan Firebee was one of the first militarily important unmanned aerial vehicles (UAV). When it was introduced in 1958, the term UAV had not yet been introduced, and it used a term from World War II, drone. 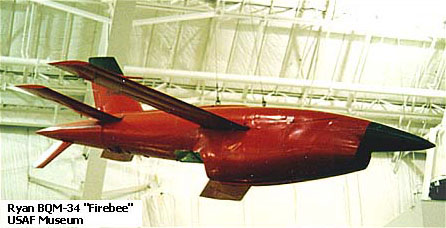 Originally, Ryan developed the Firebee as a high-speed target for both surface-to-air missiles (SAM) and air-to-air missiles (AAM), for both training and testing. The first version was called the Q-2, and, since it was considered experimental, it also had the designation XQ-2.

Depending on the mission, it was either launched from an aircraft or from the ground. Its human operator could be in the launching aircraft, on the ground, or in a separate controlling aircraft. When the mission was over, or if the drone version were hit by a "friendly" missile and disabled, it would deploy a parachute and land gently.

There were four major series of application, some with multiple versions of the aircraft:[1]

In 1961, the Air Force requested a reconnaissance version of what was then designated the BQM-34A, which resulted in the Firebee Model 147A, to be designated the AQM-34.[2] This UAV looked like its target version, but carried more fuel and had a new navigation system. These reconnaissance drones were air-launched from a DC-130 modified transport. Like all subsequent versions of this UAV, it was air-launched from underneath the wing of a specially modified Lockheed DC-130 Hercules, rather than ground-launched with rocket assistance. These are thought to have been operationally for IMINT, although SIGINT was considered, as more aerial US reconnaissance platforms do SIGINT than IMINT, and most IMINT platforms, such as the U-2 and SR-71 also have SIGINT capability.

Drones of this version were to be used in the Cuban Missile Crisis,[2] but, due to press leaks, the missions were never flown. A variant called the "Lightning Bug" was developed specifically to attract the FAN SONG radar of the Soviet S-75 Dvina/NATO: SA-2 GUIDELINE, so SIGINT could be collected of an SA-2 mission.

Concerned about the possibility of Chinese intervention in the Vietnam War, the Johnson Administration chose to use low-risk drones over southern China. Flying out of Kadena Air Force Base on Okinawa, the first mission, on August 20, 1964, was partially successful. One failed to launch, while the other successfully flew over China, returned to Taiwan, but suffered considerable damage on landing. It did, however, produce some usable photographs.

By September 1964, five missions had been flown, but only two were productive. The Nationalist Chinese wanted them, since they had been flying CIA U-2 aircraft over China and had suffered increasing losses.[3] The operation, in October, moved to Bien Hoa Air Force Base in South Viet Nam, so the missions could cover North Vietnam as well as southern China. 20 reconnaissance sorties were flown in 1964; the Chinese did shoot one down in November, and four more by April 1965. flights in 1964. While China trumpeted victory, the U.S. simply issued a "no comment".

On February 13, 1966, a "SAM Sniffer" version was shot down by a SA-2, but was able to capture the key ELINT about the SA-2 command link. The value of this information, which led to the production of the AN/APR-26 SA-2 launch receiver, was said to have justified the entire cost of the program.

The AQM-34L (Model 147SC) was the most common low-altitude imagery intelligence variant, and by far the most numerous with several hundred built under Air Force COMPASS BIN and BUFFALO HUNTER programs. While 7 "Buffalo Hunter" sorties targeted the Son Tay prison between in September and late October 1970, none actually managed to overfly it, requiring a SR-71 mission. [4] There was a concern that additional Buffalo Hunter flights might draw North Vietnamese attention to the site. The SR-71 imagery showed the camp was active, but no further overflights were made close to the time of the mission in November.

A major advance for high-risk IMINT and SIGINT missions was the high-altitude AQM-34N[2] COMPASS DAWN, which flew as high as 70,000 feet and had a range over 2,400 miles. AQM-34N's flew 138 missions between March 1967 and July 1971, and 67% were parachute-recovered with the new Mid-Air Retrieval System, which used a helicopter to grab the parachute cable in mid-air. While this had an IMINT mission, the potential of high altitude for SIGINT over a wide area was obvious.

Even within these categories, there were unusual applications, such as sending all available target drones over Baghdad in the first hours of Operation DESERT STORM, following initial attacks by "invisible" F-117 Nighthawk stealth aircraft and hard-to-detect Tomahawk cruise missiles. The Firebees were sent there to be seen, and encourage the defenders to turn on their radars — so the radars would become visible to AGM-88 HARM anti-radiation missiles, which would attack the radars.

These refer to the initial version;[5] there were considerable performance improvements, including supersonic speed, over the long service life of the vehicle.