Dmitri Ivanovich Mendeleev[1] (1834-1907; MEN-de-LAY-ev) was a Russian scientist, bureaucratic expert, public figure and humanitarian. He is recognized for numerous contributions to the social and economic betterment of Russian society and to the advancement of science, including contributions to chemistry, physical chemistry, physics, chemical engineering, geodesy, metrology, meteorology, aeronautics, mining, manufacturing, agriculture and economics. He is best known for having discovered that ordering the then (1869) known chemical elements, sixty-three in number, according to their increasing atomic weights, revealed a repeated cycle of recurrence of many of their chemical and physical properties — i.e., the properties recurred as functions of the elements' atomic weights[2] — a discovery that permitted him to predict subsequently experimentally-established revised values for the atomic weights of several elements and, audaciously but spectacularly importantly, to predict the subsequently confirmed existence of yet undiscovered elements[3] with atomic weights and properties required to fill in missing elements in an otherwise consistent periodicity in his ordering scheme,[4] a scheme which chemists subsequently referred to as the periodic table of the chemical elements, considering it to reflect a 'law' of chemistry, the periodic law or periodic system (van Spronsen 1969; Mendeleev and Jensen 2002; Saint Petersburg Encyclopedia).

Mendeleev was a driven man. In addition to producing his greatest work-the periodic law and periodic table of the elements-he researched, lectured, and wrote at a ferocious pace. A fine-print list of his published works takes up ten pages. Chemistry was the heart of his work, but he also played a major role in the economic development of Russia by modernizing that nation's weights and measures and through his advocacy of improved mining, manufacturing, agriculture, and trade. He fought ignorance and mysticism by reforming education and opening the sciences to women, and helped found and head the Russian Chemical Society. He habitually worked day and night, keeping himself going with a mixture of drive, determination, and strong Russian tea (Adler 2002).</font>

According to D. I. Mendeleev’s self-examination, four subjects, more than others, have made his name:  Periodic Law, studying physics of gases at low pressure (the gas state equation), the concept of solution as a composition of molecular associates and The Principles of Chemistry.  In fact, Mendeleev’s scientific interests and his creative activity, besides pure chemistry, stretched over such distant fields as industry (17% of his publications are related to this area), economics (14%), metrology (11%), aeronautics (9%) and agriculture (7%). The Periodic Law seems to constitute only a fragment of his heritage....(Dmitriev IS et al. 2010).</font>

Brilliant chemist, first-class physicist, a fruitful researcher in the field of hydrodynamics, meteorology, geology, and in various departments of chemical engineering and other neighboring disciplines of chemistry and physics, deep knowledge of the chemical industry and industry in general, especially Russian, an original thinker in the field of teaching on the economy...who saw and understood the challenges and future of Russia better [than the] representatives of our official authorities (Chugayev 2009).</font>

Introduction: Mendeleev and the significance of the Periodic Law

When, within a few years of the announcement in 1869 of Mendeleev's Periodic Law and ordering scheme of the chemical elements, chemists discovered three new elements (gallium, scandium, germanium), each revealing accord with his prediction of their atomic weights and properties. Likewise chemists soon confirmed his proposed revisions of the atomic weights for certain specified elements, as suggested by his periodic table. Mendeleev's contemporaries worldwide eventually came to recognize his discovery as a natural law of chemistry, one that transcended taxonomy (van Spronsen 1969 pg. ix). They recognized it as a fundamental contribution to our understanding of the nature of physical reality, setting the stage for his successors, notably the 20th century Danish physicist, Niels Bohr, to formulate a theory of atomic structure and its regularities that explained Mendeleev's periodic law, as well certain deviations to it discovered with the ever expanding discovery of new elements, in particular, the rare earth elements (Brush 1996), and notably, the physicist Henry G. J. Moseley, whose work led to refining the periodic law to reflect an ordering by atomic number — the number of protons in the element's nucleus — instead of by atomic weight. Moseley's work and that of his successors, ultimately rationalized Mendeleev's adumbration of the periodicity of properties of the chemical elements, by taking into consideration the dynamic spatial and energy distribution of the elements' electrons, the number for each element equal to the number of protons in its nucleus (Gorin 1996).

—Mendeleev's degree of dedicated attention to the Periodic Law

According to University of Oxford scientist, Philip J. Stewart:

Apart from updating his textbook and publishing occasional short articles, Mendeleev’s active attention to the periodic system lasted only from January 1869 to December 1871. After that he devoted himself for several years to experiments on the gas laws and a vain search for the ether, leaving it to others to find the elements whose discovery he had predicted. From the late 1870s he did only very intermittent research in the physical sciences, occupying himself with debunking spiritualism, studying aeronautics, advising on the reorganization of higher education, and promoting the industrialization of the Russian economy, even dabbling as an art critic ([Stewart cites:] Gordin 2004).</font> (Stewart 2007)

Mendeleev's life and work and 'world' he lived in 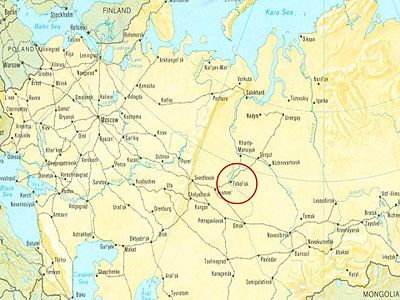 As the 17th and last child of his parents, among the 14 who lived long enough to receive a Christian name,[5] Dmitri Mendeleev entered the world on February 8, 1834 (Babaev 2009),[6] in Tobolsk,[7] a city founded in 1587, located in west-central Russia, in the heart of Western Siberia some 8° south of the Arctic Circle,[8] southeast of Moscow (2385 km 1482 mi, by train), south of the confluence of two rivers, the Irtysh and Ob rivers, nearer the confluence of the Irtysh and Tobol rivers, on the bank of the Tobol in the bend of the Irtysh.[9]

Russians during Dmitri Mendeleev's lifetime lived under the absolute rule of tsars, ruling by divine right as the representative of the Christian God.

Dmitri's mother, Maria Dmitrievna Korniliev (1793-1850), belonged to a family that had settled in Tobolsk over a century before Dmitri's birth and that owned a glass-making factory in nearby Aremiziansk where the Mendeleevs' lived, the family having introduced glass-making in Siberia. The Glass Factory, which Maria managed, provided the major economic support for the residents of Aremizansk. Maria looked after the welfare of the village residents, had a church built for them and a school for educating the children. Dmitri's father, Ivan Pavlovitch Mendeleev (1783-1847),[10] [11] [12] had directed the local gymnasium (secondary school), a scholar trained in St. Petersburg, retired early after Dmitri's birth owing to blindness. Both parents apparently doted on Dmitri as their youngest child, instilling a strong sense of morality and passion for knowledge, encouraging his curiosity.

Dmitri received early exposure to science and to chemistry in particular, for as a young boy he spent much time in the glass-factory, observing the various processes of producing, shaping and embedding colors in the glass products, observing and querying Timofei Arkadivitch Stepanov, the chief glass blower at the factory, and Andrei the Chemist who mixed "chemicals into the molten glass and create colors of violet and yellow and deep green in the molten mass " (Posin 1948).

For Mitya [Dmitri's affectionate nickname], the Glass Factory had been a source of constant mystery and adventure. Accompanying his mother on tours of inspection and consultation with workers, he had gazed with fascination upon the exciting work of the skilled craftsmen. Andrei the Old Chemist, though officially assigned only to the task of mixing coloring ingredients and other chemicals, also worked at purifying the silica sand brought in from the distant hillsides...

Mitya loved also to stop in front of the huge furnaces. Inside of these, large stone and clay crucibles were being heated by roaring flames, and inside the crucibles the final glass-forming mixture was slowly melting. More fuel was being added to the firebox below, and the temperature of the molten mass in the crucibles was slowly rising...

Mitya nodded and watched the mass in the crucible nearest the furnace entrance. After the first stage of the operation, the stage in which the mass intermixed and began to react, Mitya now was watching the fusion, the escape of the carbonic acid gas, and the formation of the molten substance. Presently, at the highest temperature, the mass became homogeneous and liquid. Anton the Furnace Man began to lower the temperature by diminishing the fuel and deflecting a portion of the flame...

Then Mitya walked jauntily, with shining exhilarated eyes, past the workmen in the furnace rooms, past the rooms where molds were made for casting glass into various shapes, past the sand rooms piled high with newly arrived silica sand, past rooms with sieves, clay bricks, fire-clay crucibles, tables for rolling glass, hoisting mechanisms, rooms with tremendous supplies of glass panes ready to ship, rooms with long rows of shimmering glass goblets and glass saucers, rooms with colored panes of glass assembled into mosaic combinations.</font> (Posin 1948)

From his earliest boyhood Dmitri showed great interest in the outdoors, learning to love the Russian land. He learned of industry and of applied chemistry through his experiences accompanying his mother frequently on inspection visits to the glass factory, which she managed and eventually became its de facto owner. He learned of chemical elements and compounds and of chemical reactions.

He stood out as a young boy for having a remarkable memory, enabling him to join in adult discussions to supply dates and places and other facts the adults had trouble remembering. He also early showed mathematical ability, performing mental computations for the residents.

He received a boyhood science education of broader scope from his brother-in-law, Bassargin, an educated man who had been exiled to Siberia after taking part, in 1825, in a failed revolt against the Tsar.

Another influence in Dmitri's life was his sister Olga's husband, Bessargin. After being banished to Siberia for his political beliefs as a Russian Decembrist (Dekabrists, a group of literary men who headed a revolution in 1825(4),), Bessargin occupied himself teaching Dmitri the science of the day.</font> (Rumppe and Sixtus 1992)

Mendeleev comments on his educational experience at the Main Pedagogical Institute, 1850-1855, beginning at age 16 years:

I myself am indebted to the Central Pedagogical Institute for everything in my development… Let me call attention to the fact that the number of disciplines or Professors in our institute were few as compared of their number in the present-day educational institutions, and therefore many disciplines were common at different departments to such extent that the students specialized in natural sciences and mathematics during first two years studied all the disciplines together… We all remembered well, since we had given at the entrance personal receipts, that we would be teachers, and therefore discussed in detail all future vitally important circumstances and by own mind, and therefore by inward understanding arrived at a decision that, for example, in our circle the preparation to exams was considered somewhat blamable, and although during the term we worked much, during the exams we played cards nights through and looked down on those fellows who were preparing (Dmitriev 2009).

Chronology of events in Mendeleev's life and times