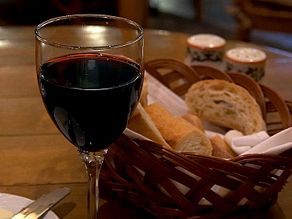 Wine is an alcoholic drink made from fermented grapes or similar soft fruits. Usually, if made from a fruit other than grape, the name of the fruit prefaces the title: elderberry wine, plum wine. Some beverages made from grain are called wine; it can be argued, however, that this makes them beer rather than wine—sake, a Japanese beverage, is an example. Many proverbs and sayings celebrate the benevolent qualities of wine, beginning with the Bible. One of the most famous is, "A day without wine is like a day without sunshine."

Wine can be classified in many ways: by region or origin; by type of grape; by sweetness; alcohol content; color -- red, rosé, or white; sparkling or still. The year in which a wine was made or the vintage, can play a role in classification, as climatic conditions may differ from year to year and affect the quality of the grapes grown in a particular season.

There has long been a tradition that red wine should be served with red meats and white wine with chicken and fish. However, many people will break this tradition. (In Norway, it is traditional to serve red wine with cod.[1])

White wine is usually served chilled. An opened bottle may be kept in an ice bucket while it is being consumed. Red wine is usually served at room temperature. Some people think that red wine should actually be warmed slightly, some other people suggest chilling it. Most likely, the correct temperature depends on the particular variety of wine and, to a large extent, your personal preference.

Mulled wine is red wine to which spices (such as cinnamon and nutmeg) and possibly fruit may have been added, and that has been heated to a hot temperature. Some mulled wine recipes also call for the addition of stronger spirits such as brandy.

Traditionally, most wine bottles will have a cork of either rubber or cork oak. Unlike champagne, which can be opened by hand, a wine cork sits flush with the top of the bottle. A cork screw or similar tool is required to remove the cork from the bottle neck. A simple cork screw typically takes a T-shape. Once screwed into the cork, a degree of muscle is required to remove the cork. More advanced corkscrews have been developed using various levers to aid the extraction of the cork. One modern system peaces all the way through the cork and blows in gas under pressure, forcing the cork out. When opening a traditionally corked bottle, care must be taken not to damage the cork. It is all too easy to break the cork while trying to remove it, leaving half the cork stuck in the bottle neck. In the even that a corkscrew is not available, it is possible to push the cork down into the body of the bottle, allowing the wine to be decanted. However, this practice may spoil the flavor of the wine.

In recent years, screw caps have become popular with many bottlers. The advantage of a screw cap is that it avoids the problem of corkage, which is where the airtight seal of a traditional cork may not be maintained, and the wine will spoil. Screwcaps also avoid the problem of pieces of broken cork falling into the wine upon opening.

While modern wines are filtered to remove any sediment, in older wines, particularly red wines, some sediments may form at the bottom of the bottle as it ages. After opening, if the bottle contains sediments, the wine should be carefully poured or decanted into another bottle - known as a decanter. A delicate touch is required so as not to disturb and stir up the sediment, leaving them in the bottle and keeping the decanted wine clear. Some people may decant their wine using a handkerchief to filter the sediments out; however, this may taint the flavour of the wine.

Wine is usually served in a tulip shaped glass. Sparkling wines, such as champagne or cava, may be served in narrower flute glasses or wider saucer shaped glasses.

One highly specialized (with a romatic flare) way of opening a bottle of champagne is with a sabre: the practice is known as sabrage. In this way, a blade is placed flat on the neck of the bottle and is struck forward very quickly, slicing the upper neck and cork away from the bottle with a very clean cut. The compression of the gas blows away any remnants or shards of glass. However, only certain bottles may be opened this way; the construction of the bottle is the significant dependent factor.

In order to describe accurately the subtle differences between different wines, a special vocabulary has developed. To the outsider, these descriptions can sound very strange with words like 'oaky', 'bodied' and 'pepper'.

In tasting wine, the taster first holds the glass up to the light to view the clarity, then swills the wine in the glass to help release the fragrances, takes a sniff, and finally takes a long, drawn-out sip while rolling the wine on the tongue. (If many wines are to be tasted, this sip is spat out to avoid intoxication. The practice has spawned a long line of jokes in popular culture.)

Wine has acquired a high level of significance in religion. It is commonly mentioned in religious stories and used in many religious ceremonies and festivals. Such use is centuries old; the ancient Greeks and Romans both had gods of wine.

The celebration of the Jewish sabbath, at sundown each Friday, begins with a blessing over a cup of wine, called Kiddush. At the annual Passover meal (the Seder), four cups of wine are drunk during specific parts of a special ceremony.

In the Christian religion, the first miracle performed by Jesus involved him transforming water into wine at a wedding. During the last supper, Jesus served wine to his disciples telling them that the wine represented his blood. Christians ceremonially repeat this meal, drinking a token amount of wine and eating bread.