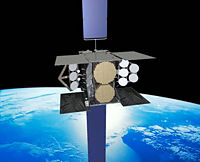 Wideband Global Satellites (WGS) began operations, in the Block I version, in October 2007. They were previously called the Wideband Gapfiller System. They serve fixed or semifixed base locations rather than tactical users, and are the replacement for the DSCS III (Defense Satellite Communications System). They complement the tactical MILSTAR, the third generation of which is the Advanced Extremely High Frequency system. Both these strategic and tactical systems are intended for two-way communications, as opposed to the Global Broadcast Service information distribution satellites.

Operating in the X- and Ka-bands, these geosynchronous satellites have approximately 10 times the bandwidth of their predecessors, and can route between 2.1 and 3.6 Gbps of digital information. [1] Orders for Block 1 satellites followed, procured, as firm-fixed price contracts for commercial equipment. The system, on the Boeing 702 commercial satellite, demonstrates the use of COTS technology for military purposes. The project is also exploring military modifications.

WGS enhances and will eventually succeed, DSCS III, as well as the Global Broadcast Service function currently provided by UHF Follow-On satellites. They were to be succeeded by the Transformational Satellite System (TSAT) constellation, which will use laser rather than radio links earth, but radio among the satellites. Launches are planned to begin in 2013, [2] although the project is still in a government-funded competitive proposal stage and operational funds have not been committed. On April 6, 2009, Secretary of Defense Robert Gates said that TSAT will be terminated, and two additional Advanced Extremely High Frequency (AEHF) satellites would be purchased; final decisions here will depend on the fate of the new budget in Congress. AEHF operates in a different frequency range and is more resistant to electronic warfare than WGS; TSAT was also to be more hardened.

WGS poses some unusual aspects of technological risk management, according to the General Accountability Office. At the time that Block I was deployed, it used COTS technology, with the low risk of methods already in service. Certain "critical technologies—the X-band phased array antenna system and digital channelizer—are no longer considered commercial items even though their design and configuration will not change for Block 2." The Air Force, indeed, enhanced on these technologies, for specific military requirements: "an upgrade that will allow ground controllers to direct two antennas to bypass the onboard channelizer for added airborne intelligence, surveillance, and reconnaissance support. Bypassing the channelizer will double the data transfer rate for those two channels. The WGS acquisition strategy indicates that the upgrade is low risk because the design and modification are within existing technology and contractor capabilities." Block 2 acquisition, beginning in February 2006, did not use commercial item procedures, but rather a "fixed price incentive fee contract for the Block 2 satellites that includes more reporting requirements such as earned value management data." [4]