Wasp-class amphibious assault ships (LHD) are the largest tyoe of amphibious warfare vessels in the U.S. Navy. They usually are the flagship of an Amphibious Ready Group (ARG) carrying a Marine Expeditionary Unit, or of an Expeditionary Strike Group such as Task Force 151 conducting anti-piracy operations. 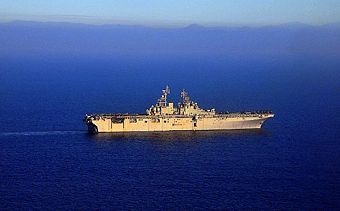 In the ARG, the LHD stays farthest back from the shore, using helicopters and MV-22 Osprey tilt-rotor transports to move Marines inland. It also provides close air support with AV-8 Harrier and, in the future, with F-35B Lightning II short-takeoff-vertical-landing aircraft.

They can carry 1,870 combat-equipped troops as well as aircraft and boats to transport them. They have 50 regular and 16 ICU medical beds for combat support or humanitarian missions; additional stretchers can be accommodated in troop compartments to give additional hospital capability.

Their flight decks have nine spots for simultaneous vertical operations. This translates to capacity for 42 of the aging Marine CH-46 medium helicopters.

In the well deck, there can be three Landing Craft Air Cushion (LCAC), two Landing Craft Utility (LCU) or 39 amphibious assault vehicles (AAV). The cargo hold can carry 140 wheeled vehicles and up to 750 pallets of U.S. Marine Corps ammunition.