Landing Craft Utility (LCU) are large landing craft which, as opposed to most other such craft, are not simply ship-to-shore shuttles but can operate for up to 10 days at sea. They are commanded by senior petty officers. 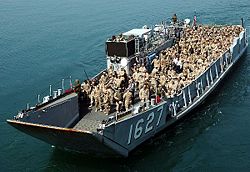 LCUs are carried about Landing Platform Dock ships, or may serve as independent utility boats in a port or in a coastal area. Their range, at 8 knots, is 1200 miles.

The U.S. Navy has several classes of LCU, displacing 200 tons empty and 375 tons at full load. They have a crew of 14, but can carry combinations of 400 passengers, three M1 Abrams tanks or ten Light Armored Vehicles (LAV). They are 135 feet long and have a beam of 29 feet, and have bow and stern loading ramps.

Typically, they would not be used in the first waves of an amphibious attack, but would bring up heavy equipment after a beach had been secured by Marines landed by helicopter, tilt-rotor aircraft, or Landing Craft Air Cushion.

In the Second World War and shortly afterwards, vessels having the general characteristics of modern LCUs were originally called Landing Craft Tank (LCT), in two types, the 284-ton Mark 5 with a bow ramp and the 286-ton Mark 6 with bow and stern ramps. LCTs were adapted to a wide range of applications, including artillery and multiple rocket launchers firing alongside the landing force. At the Battle of Normandy, 26 Mark 5 LCTs were armored and gunned, effectively making them tanks that operated afloat and on the beach. Others became minesweepers.

After the war, the Mark 5s were no longer used. The Mark 6s were first designated Utility Landing Ships in 1949, and took on the current LCU designation in 1956. [2]