Introduced in the First World War, a tank is a land combat vehicle that, in its basic form, can travel over a wide range of terrain because it uses tracks rather than wheels, has at least one main main high-velocity gun and one or more machine guns, and some level of armor and other protection. The design of each tank type is a balance among mobility, firepower and protection. A physically heavy tank can carry large guns and thick armor, but may be slow, and civilian bridges may not support its weight. If weight is saved in the gun, the tank may be able to support infantry but not fight other armored vehicles. A lightly armored and maneuverable version may not be able to take hits from even light antitank weapons. 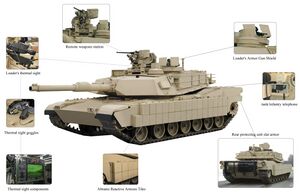 In modern militaries, tanks are assigned to armored or "heavy" units, They are a subset of armored fighting vehicles (AFV). AFVs lack at least one of the key technologies of a tank. An infantry fighting vehicle (IFV) (e.g., U.S. M2 Bradley, Russian BTR) or BMP) usually has tracks but could have wheels, has lighter armor, and, while it may carry missiles that can kill a tank, cannot expect to survive a short-range engagement with a tank. The reason for their missile armament is to have a tank-killing weapon with greater range, although sacrificing some flexiblility, than a tank gun.

Armored personnel carriers (e.g., U.K. FV430 or warrior differ from infantry fighting vehicles in that the troops never fight from inside, but always dismount. Still, an APC may look superficially like a tank, because it may have a turret for a weapon that gives fire support to dismounted troops.

A self-propelled howitzer (e.g., U.S. M109 howitzer) or multiple rocket launcher has more firepower than a tank, but lacks the 360-degree engagement capability of a tank turret and has only light armor.

"Tank" was actually a British code word for their first vehicles, intended to break the stalemate by being able to cross barbed wire and trenches, leading the way for infantry. They were first used, in force, at the First Battle of Cambrai (20 November - 3 December 1917), by the British, and, while primitive by modern standards, were so effective that the British were unprepared to exploit the massive hole they opened in the German lines.

There is little physical resemblance between a modern tank and those of the First World War, and there have been many changes in doctrine. Originally, their role was seen as infantry support, but one of the key aspects of the World War II blitzkrieg was the use of teams of tanks, vehicle-borne infantry, mobile artillery, and close air support; the role of the traditional foot-bound infantry was to seal the flanks of the holes the combined arms, tank-led force had opened in enemy lines.

During the Second World War, there was much tank development, and a number of variants proved impractical or usable only in special situations. The British used the terminology of "infantry" tanks and "cruiser" tanks; the more modern terminology would be a heavy tank in direct support of infantry and a medium tank operating in all-motorized formations. Light tanks and even lighter "tankettes" were given scouting roles, but often proved impractical because they were too vulnerable. There are armored scouting vehicles in effective use today, but one of the first things one will encounter in their builders' description is "this is not a light tank". One general principle of a viable tank is that it can fight other tanks, and, the design of many medium or, in modern terms, main battle tanks is that they are optimized for antitank roles and may not be as useful in other roles.

In recent years, with the advent of antitank guided missiles and effective tank-killer aircraft, there have been predictions that the tank will go the way of the armored knight, the heavy gun naval battleship, and other obsolete technologies. Tanks keep evolving, however, as well as variant armored vehicles that complement the true tanks.

Originally, tanks were armored with steel plates, first to protect only against small arms fire and artillery fragments. The plates were usually riveted, and, while made of increasingly tough armor plate, were still solid vertical or horizontal sheets. To measure the penetration of an anti-tank weapon, the standard is a sheet of standardized rolled homogeneous armor (RHA) at right angles to the flight path of the weapon.

Modern armor is neither at right angles or homogeneous. The most vulnerable areas of a modern tank, such as the glacis that forms the front of the turret, is sharply sloped, which can deflect antitank weapons and increases the effective thickness. While the exact composition of modern armor is classified, a major technology breakthrough was made at the British Chobham Common research center, which pioneered the use of ceramic composite materials. Countermeasures were developed, and the armor package on a first-line tank is known to be a multilayered package including ceramics, dense metal such as tungsten or depleted uranium, steel, and other materials.

First-line modern tanks use a 120mm gun as their main weapon. With the exception of British tanks such as the Challenger, all of the 120mm guns fire an armor-piercing, fin-stabilized, discarding-sabot projectile, which cannot be used in a conventional rifled barrel; these main guns are smoothbore. The British preference is to use high explosive squash head projectiles, which require a rifled barrel.

Some tanks can fire guided missiles from the main gun barrel, or have another missile launcher beside it. All also have a medium machine gun mounted coaxially with the main gun, both for engaging light targets while under armor protection, and sometimes to spot the impact point for the main gun.

Most tanks have at least one additional machine gun, and often more. The most common second machine gun was a heavy one of .50 or 12.7mm caliber, with limited antiaircraft capability. Traditionally, that machine gun was on top of the turret, and operated by the tank commander, who stood, his head and upper body exposed, in the open top hatch. More recent tanks, however, have sufficient external viewing systems that the tank commander can have an adequate view, and also operate the heavy machine gun, while staying under armor.

At first, there was very little communication among tank crews, and none to the outside. The tank commander would signal the driver to go left by kicking him in the left shoulder.

First World War tanks bore very little resemblance to modern tanks. WWI tanks had armor that protected the crew against machine gun fire. Rather than having a body and turret on top of the treads and drive train, the treads went completely around each side. Weapons were primarily "broadside", in protrusions on the side called sponsons.

During the air campaign of the Gulf War, Coalition aircraft frequently attacked Iraqi tanks, the strongest of which was an export version of the Soviet-designed T-72 (tank), but also many T-54 (tank)s or T-55 variants or Chinese-manufactured Type 59 (tank)s. In this stage of the war, the attacks tended to be long-range fighter-bombers rather than the armed helicopters, attack aircraft such as the A-10 Thunderbolt II, and attack helicopters such as the AH-64 Apache. An especially destructive technique was called "tank plinking", where F-111 aircraft dropped laser-guided bombs on the least well-armored parts of a tank, detected them by their thermal difference from the terrain, even after the engine was cooling.

In the land campaign, British Challenger (tank)s, French AMX-30 (tank)s, and U.S. M1 Abrams (tank)s and aging M60 Patton (tank)s used their main guns on enemy tanks. Western 120mm cannon rounds usually achieved catastrophic kills, where the frontal Chobham armor of the British and U.S. tanks were invulnerable to the Iraqi main guns. While the U.S. and Iraqi main gun rounds were both armor-piercing, fin-stabilized, discarding-sabot (APFSDS) rounds, the Iraqi weapons were tipped with tungsten while the U.S. equivalents were made of depleted uranium, which, much more dense than tungsten, transferred more energy to the target. British antitank shells used a different technology, High Explosive Squash Head (HESH).

There were very few tank-against-tank engagements, but tanks did have a substantial role as largely invulnerable machine-gun carriers and providers of fire support to infantry. They also were used for psychological effect in the Thunder Run operations, which were a controlled violation of the dictum that tanks do not operate without dismounted infantry support. The Thunder Runs stayed on roads where the Abrams and Bradleys could move at high speed and avoid infantry traps.

While there is research, by at least Russia and the U.S., there is considerable controversy if there is a real need to develop an even heavier tank. If one is developed, it will have a main gun of at least 140mm if a conventional cannon, although there is substantial interest in electromagnetic railguns as the main weapon of tanks.