Uzbekistan is a land-locked Central Asian nation, formerly part of the Soviet Union.[1] 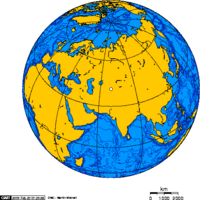 Eighty-eight percent of Uzbekistan's 27 million citizens are Muslims, and the majority ethnic group is the Uzbek people, a Turkic group. That Uzbeks form substantial minorities in Tajikistan, Turkmenistan and Kyrgyzstan, and smaller but politically significant groups in Afghanistan and China, add to the country's influence.

Uzbeks, in comparison with nomadic peoples such as the Kazakhs and Kyrgyz people, have the longest association with their land. Shaybani Uzbeks defeated the Timurids to form an empire in 1500 AD. The Russians eventually came to dominate the Shaybanis. [2]

Under the Russians, the capital, Tashkent, is the largest industrial and commercial center in the region. Uzbekistan is the world's third-largest cotton producer, although its intensive farming has caused great ecological damage.

After Uzbekistan refused to implement an agreement on currency reform, the International Monetary Fund closed its Tashkent office in 2000. U.S. involvement with the war, however, led to new attempts in 2002.[3]

The country, like others of the region, has both an internal problem, and a problem in bordering states, with militant Islam.

President Karimov has, on a number of occasions, arrested apparently ordinary Muslims and charged them with extremism. Islamic political parties have not been able to register. He passed a Law on Freedom of Conscience and Religious Organizations in 1998, which was seen as repressive to Muslims.

Six large car bombs were detonated in Tashkent on February 16, 1999. It was blamed both on Islamic militants and an opposition political party called Erk (Freedom), a 1990 spinoff of Birlik (Unity) formed in 1988. Both parties were banned in 1990.[4]

The Islamic Movement of Uzbekistan is, after the Taliban, perhaps the most militant jihadist organization in the region. Karimov has also called Hizb ut-Tahir a threat, which, while Islamist, is generally accepted to be nonviolent.

Abdul Rashid Dostum, an Uzbek, was one of the leaders of the Northern Alliance.

Uzbekistan is strategically and economically important to Afghanistan, as the main land route from northern Afghanistan crosses into Uzbekistan over the Friendship Bridge. Securing the Afghan cities of Mazar-e-Sharif and Taloquan was an early priority in the Afghanistan War (2001-), major combat phase. Ethnically Uzbek troops under Berryelah Khan, were a major part of the Northern Alliance and key to the attack on Taloquan.

In December 2001, Uzbekistan and the UN signed an agreement to facilitate humanitarian supply, especially across the Friendship Bridge. [5]