The term Central Asia is not precisely defined. Various organizations define it by contiguous geography, in ethnic and linguistic terms, or by economic relationships. 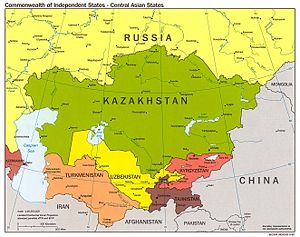 The Commonwealth of Independent States and Central Asia

Most definitions do focus on countries created by the breakup of the Soviet Union, but do not limit it to those former Soviet Republics. 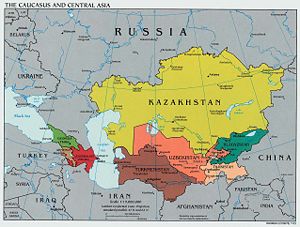 Core contiguous nations and others in the region

In one common usage it designates five geographically adjacent predominantly Muslim former Soviet republics — Kazakhstan, Tajikistan, Turkmenistan, Uzbekistan and Kyrgyzstan. For example, that definition is often used by the UN [1] [2].

Afghanistan can reasonably be added, since it is closely related culturally and historically to those nations and geographically contiguous with them. Azerbaijan is not geographically contiguous, but it is nearby and is another former Soviet republic that is mainly Muslim so some [3] include it. In its reference documents, the Central Intelligence Agency considers Azerbaijan part of Southwestern Asia. [4]

Primarily focused on regional import-export and resource use (e.g., water, energy and especially sustainable energy, gender and economy, knowledge-based development, statistics, trade, transport and torder Crossing), the UN Special Programme for the Economies of Central Asia[5] includes both Afghanistan and Azerbaijan, in addition to Kazakhstan, Kyrgyzstan, Tajikistan, Turkmenistan and Uzbekistan. Established by the Tashkent Declaration, the founders were the Republic of Kazakhstan, the Kyrgyz Republic, the Republic of Tajikistan, and the Republic of Uzbekistan on the one side, jointly with the larger regional organizations, the U.N. Economic Commission for Europe (ECE) and the U.N. Economic and Social Commission for Asia and the Pacific.[6] One of the specific coordinating areas is the multinational system of pipelines for petroleum produced in, and shipped across, the region. 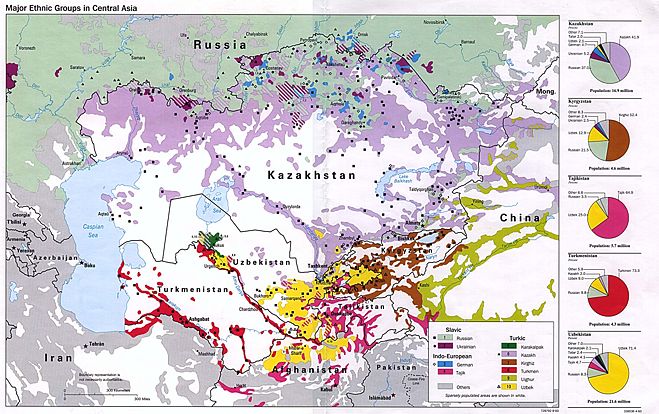 Some ethnic concentrations in areas of Central Asia

Some definitions are broader yet. Some [7] include what is now the Chinese province of Xinjiang, a predominantly Muslim area with a language related to Turkish, calling it "East Turkestan". Arguably, Mongolia and various other areas could be included as well.

Another grouping, including major powers external to the region as did the more defense-oriented North Atlantic Treaty Organization and South East Asia Treaty Organization is the Shanghai Cooperation Organization, created on June 21, 2001. It founding members included China and Russia as well as Kazakhstan, Kyrgystan, Tajikistan and Uzbekistan but not Turkmenistan.[8]